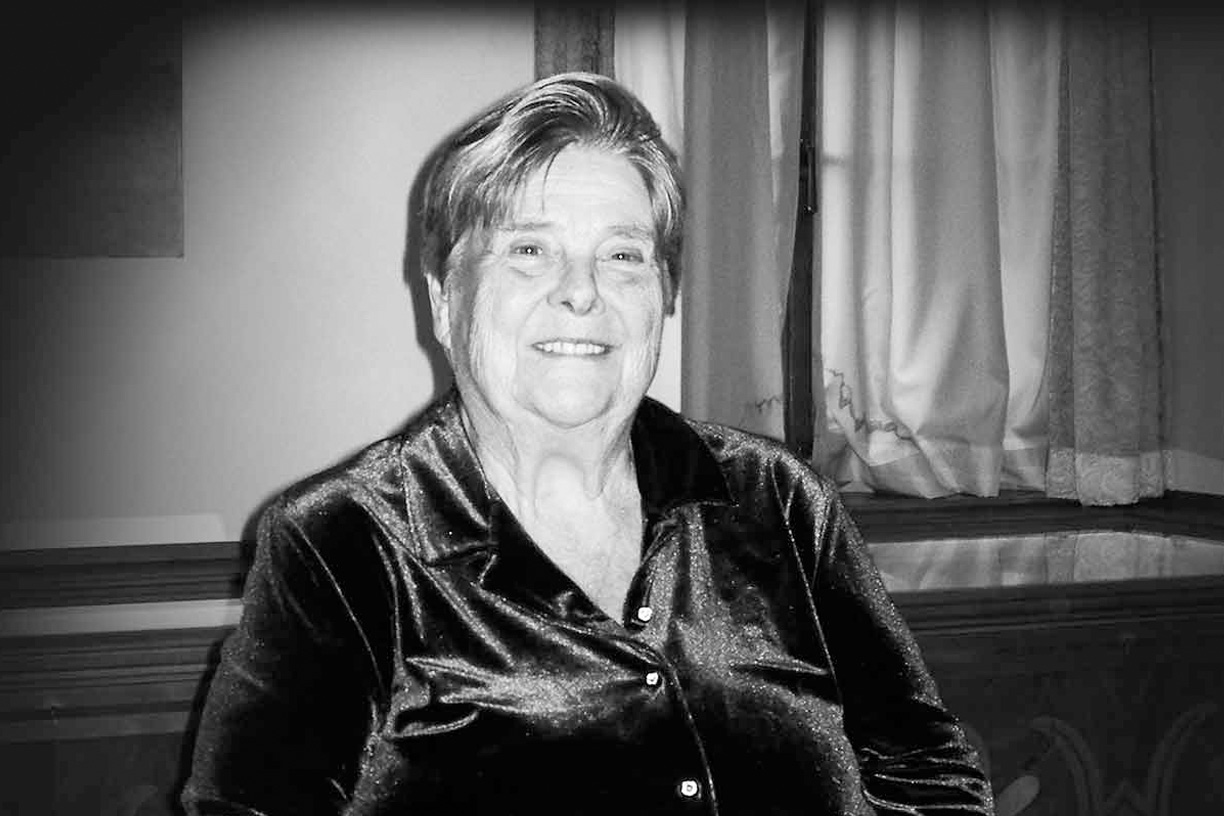 It is with great sadness that we announce that Tatiana Fabergé, a founder member of our Fabergé Heritage Council, passed away on 13th February 2020 at her French residence near the border with Switzerland. The only daughter of Theodore Carl Fabergé, and Tatiana née Cheremeteff she was born in Geneva in 1930. Her father was the third son of Peter Carl Fabergé and her mother a Princess from Georgia. Had it not been for the Russian Revolution it is unlikely that her parents would have ever met - yet alone married. Tatiana was always known as the great-granddaughter of Peter Carl Fabergé and her connection with Georgian royalty was not generally known.

In the early 1950s she studied jewellery design in Paris and had close contact with her uncles Eugene and Alexander Fabergé who ran a small company called Fabergé & Cie. Founded in the 1920s it repaired Russian objects, produced some artefacts and jewellery (which were marked ‘Fabergé Paris’, so as not to be confused with those made prior to the Revolution) and dealt in antiques. Her uncles gave her first hand information about the House of Fabergé in Imperial Russia. She learnt that Gustav Faberge, who was of French descent, had started the family business in St Petersburg in 1842. He had added the accent to the final ‘e’ possibly because he considered it gave the name more style, or because a ‘g’ in Russian was pronounced ‘jay’.

For a period afterwards she worked with her father designing various precious objects that were crafted in Geneva and Paris. She later joined CERN, the European organisation for nuclear research, in an administrative capacity and progressed to a managerial position. Upon her retirement she dedicated her life to researching the Fabergé history and promoting its heritage.

With glasnost resulting in the Soviet Union opening its historical archives, the opportunity arose for discovering new aspects of Fabergé’s history. She collaborated with Valentin Skurlov, a Fabergé scholar based in St Petersburg, who in 1989 staged the first exhibition of Fabergé in the USSR. Skurlov found the manuscript memoirs of Franz Birbaum in the archives of the Academy of Sciences of the USSR. Birbaum was Peter Carl Fabergé’s Swiss head master craftsman from 1896 through to the demise of the firm when it was nationalised and its stock confiscated by the Soviets in 1919.

This resulted in their first joint publication, the privately published The History of the House of Fabergé, which were Birbaum’s memoirs in Russian with an English translation. It appeared in 1992 to commemorate the 150th anniversary of the foundation of Fabergé. Although produced economically, this was a very valuable publication for Fabergé scholars and enthusiasts. By contrast, the next volume was very lavish.

Christie’s published The Fabergé Imperial Easter Eggs in 1997. Tatiana co-authored it with Lynette Proler and Valentin Skurlov and included the first ever catalogue raisonné of the Easter eggs Fabergé produced from 1885 for the Emperors Alexandra III and Nicholas II. This was the first book exclusively on Fabergé’s Imperial Eggs to have been published after the opening of the archives in Russia and consequently could draw on previously unseen material, including the original Fabergé invoices.

The book therefore broke new ground with the catalogue presenting the eggs in chronological order. This was based on the then known eggs and the descriptions in the archives. Several eggs, which had been regarded as ‘Imperial’ for many year lost this status as they had not been bought by the reigning Emperor. The Forbes Collection boasted a dozen Imperial Eggs prior to the publication of the book, but afterwards this was reduced to nine. Kip Forbes and Tatiana remained on good terms, despite the reclassification.

After World War II, the Fabergé family had discovered Sam Rubin’s company Fabergé Inc. was using their unique name as a perfume brand in the United States. In 1951, when Tatiana was studying in Paris, the Fabergé family decided to settle out of court so as to avoid protracted and expensive legal proceedings (which it could not afford). They settled for only US$25,000 for their name to be used solely for perfume. Unbeknown to them, in 1946 Rubin had registered the Fabergé trademark for jewellery in the US.

In 1989 Fabergé Inc, which had acquired Elizabeth Arden a couple of years earlier, was bought by Unilever for US$1.55 billion. Unilever registered the Fabergé name as a trademark across a wide range of merchandise internationally and began granting licenses to third parties to make and sell a range of products under the Fabergé brand.

In January 2007 Pallinghurst Resources announced it had acquired Unilever’s entire global trademarks, licenses and associated rights relating to the Fabergé brand name. It also announced that the company intended to restore Fabergé to its rightful position as the leading purveyor of enduring and endearing personal possessions. The reunification of the family with the Fabergé brand was announced later. This was achieved with Tatiana Fabergé and her cousins Theo and Sarah Fabergé becoming members of the new Fabergé Limited’s Heritage Council. Tatiana replied, ‘I have dreamed of this moment for decades. It has been my life’s ambition to restore the unsurpassed standards of design and workmanship that characterised my great-grandfather’s treasures. Now finally, we have the basis for fulfilling this ambition. I am very pleased to be part of the most significant developments in Fabergé’s history.’

Although Tatiana had not worked in the jewellery industry per se, she had a good knowledge of the diverse range of individual contemporary jewellers. During her first meeting in January 2008 with the company’s newly appointed Creative Director Katharina Flohr, the two discussed those who could be described as ‘artist jewellers’. After the conversation Tatiana added, ‘and there is this other young jeweller in Paris…..’, but could not remember his name. This triggered a preview of jewels that Katharina had seen at Philips de Pury in London the previous summer. She searched her 2007 diary and came up with the name Frederic Zaavy, which was the name Tatiana was trying to recall. The only problem was that when Katharina had tried to contact him with regard to a fashion photo shoot, she failed. On hearing this Tatiana responded, ‘I think I can help find his contacts’. The two met at a Lebanese restaurant in Shepherd Market, Mayfair with a Parisian friend of Zaavy, who became the new company’s first workmaster.

After the contracts had been signed Tatiana joined the creative team and Frederic Zaavy on a visit to Russia, which coincided with the White Nights. In St Petersburg Tatiana showed the team the family’s roots such as Peter Carl Fabergé’s HQ and city home at 24 Bolshaya Morskaya; her grandfather’s (sadly very dilapidated) country house at Levashevo, where to her delight she found a four-leafed clover. They also visited the city’s museums, palaces and theatres for inspiration. Her fondest memory of the visit was being led to the dance floor in a Soviet-style dance hall by Frederic. The party finally retired at dawn. In Moscow, Tatiana demonstrated the power of the Fabergé name when after a lunch with Tatiana Muntian, Curator of The Kremlin Armoury Museum (which has 12 Fabergé Imperial Eggs) a taxi was no where to be seen. Tatiana stopped a private car, told the driver she was Tatiana Fabergé and asked him if he would kindly take her namesake to the Kremlin. Either dumbfounded or petrified, he did!

Speaking at the official launch of Fabergé at Goodwood House at nine hours, nine minutes and nine seconds on the ninth September 2009 (09.09.09hrs 09.09.09) Tatiana said: ‘The objective of the relaunched company is to embrace the spirit of fine craftsmanship, design and innovation that was such an integral part of Peter Carl Fabergé’s philosophy. However, you will learn more about this later in this presentation. Both Sarah Fabergé and I know that our great-grandfather would certainly approve and indeed be extremely proud of what has been achieved by the 21st century Fabergé. We thank the team for their achievements.’

While working for Fabergé, a great deal was going on behind the scenes. After the publication of the Fabergé Imperial Easter Eggs (the egg book), work was begun on a book that would be the definitive work on Fabergé. While this was in progress scholars were questioning the chronology in the egg book. Scholars considered the Blue Serpent Clock Egg owned by Prince Albert II of Monaco should have been placed later in the time line. The egg book placed it at 1887 but the general opinion was that the Fabergé workshop was not ready at that time for such a sophisticated egg with a large expanse of enamel. A couple of minor changes were made to the timeline in the mid-1890s with Monaco’s egg being moved to 1895. The egg discovered in the States in 2014 took its former 1887 place. This is now known as the Third Imperial Easter Egg, its surprise is a lady’s watch by Vacheron Constantin. The change to the egg book’s chronology did not detract from the sterling research work undertaken by Tatiana and her co-authors.

Fabergé: A Comprehensive Connoisseur’s Reference Book by Tatiana Fabergé, Eric-Alain Kohler and Valentin Skurlov was published by the Foundation Igor Carl Fabergé in 2012. It sheds new light on the House of Fabergé and includes archive material both in the form of documents and photographs that had not previously been published.

Tatiana was a pillar of the Fabergé community and will be greatly missed. She spoke at least five languages and had friends in many corners of the world. Like Peter Carl Fabergé she appreciated fine food and was an excellent cook herself. When visiting her I always liked to enter her large pantry, not to see what was there, but to stand, close my eyes and absorb the cornucopia of aromas. It was an experience never to be forgotten. And Tania, you will not be forgotten either – rest in peace.