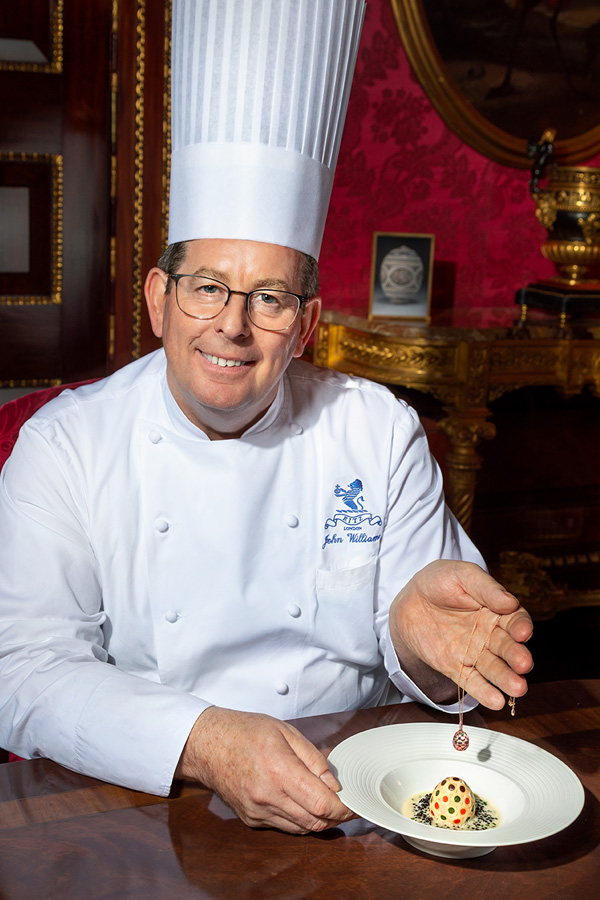 London, 3rd April 2019: Celebrate Easter 2019 in style as two of the world’s most iconic brands, Fabergé and The Ritz London, launch a unique experience to ignite the senses. Renowned for their luxury and elegance, this bespoke Easter collaboration is the perfect marriage of heritage and modernity.

The Mosaic Egg was one of the most technically sophisticated and extraordinary of all the Fabergé Imperial Easter Eggs, and took over a year to craft. The Egg was the work of Fabergé’s first female designer, Alma Theresia Pihl, who was inspired by a petit point carpet she was embroidering as part of her marriage trousseau. It was one of a series of 50 eggs made and delivered to the Russian Imperial Royal family, all unique and individual in their design. Today, the Mosaic Egg is part of the British Royal Collection. Fabergé’s modern-day creations take inspiration from original pieces. The Treillage egg pendant was inspired by the Diamond Trellis Egg and the Mosaic egg pendant is born from the Imperial Mosaic egg.

In keeping with Fabergé’s history for surprise and ingenuity, John Williams has created a luxurious Eggs Fabergé dish which closely mirrors the multi-coloured Fabergé Treillage egg pendant. Using the inside of an egg shell as a mould, the delicate dish is created using the very highest level of technical expertise. The dish features a soft-boiled quail’s egg encased in a lobster mousseline, decorated with a circular pattern of vegetable gems (including aubergine, courgette and heritage carrot) which have been set into pasta to represent the colours and quilting of the ruby, tsavorite and fire opals gemstones set into the rose gold of the Fabergé Treillage egg pendant. The edible Eggs Fabergé is served on a bed of Oscietra caviar, and finished with a langoustine à la nage sauce.

This unique Eggs Fabergé dish will be available for guests who reserve the three-course Fabergé menu in the Michelin-starred Ritz Restaurant during Easter Week. This Fabergé menu includes wine pairings expertly selected by the hotel’s Head of Wine Giovanni Ferlito and a limited-edition menu card, signed by both John Williams MBE and Sarah Fabergé. The Fabergé menu will be available during lunch service between Monday 15th April until Monday 22nd April inclusive, for a maximum of 10 guests per service (due to the complexity of the dish) and is priced at £295 per person. An overnight residential Fabergé experience at The Ritz is also available for guests arriving between Monday 15th April and Monday 22nd April 2019, inclusive of the limited-edition Fabergé three-course menu in The Ritz Restaurant. The residential Fabergé experience starts from £1,155.00, inclusive of Value Added Tax and English Breakfast, based on two people sharing.

As part of the Easter celebrations, Fabergé will be exhibiting both jewellery and timepieces in Long Gallery at The Ritz London. Before or after lunch, guests can visit the Fabergé pop-up salon, meet the people behind the name and discover the exquisite new collections. There is also the opportunity to design your own bespoke Fabergé jewellery at Fabergé’s by-appointment London salon for those seeking a truly unique creation.

Sean Gilbertson, CEO of Fabergé, says: “The story began in 1885 when Emperor Alexander III gifted Empress Maria Feodorovna a Fabergé golden egg for Easter. Today Fabergé continues the art of gifting with exquisite creations inspired by its illustrious heritage. We are delighted to see this tradition continue with a modern twist, both in the spectacular dish and menu John Williams has created and the Easter themed ‘pop up’ we are hosting over the Easter weekend.”

John Williams MBE, Executive Chef at The Ritz comments; “As a Chef, I have a passion to create dishes which are both visually beautiful as well as full of flavour. It is a huge honour for my Eggs Fabergé dish to be endorsed by Fabergé with this special partnership for Easter. I hope that our guests will enjoy the dish and it reflects the technical mastery and exceptional craftsmanship for which Fabergé is world-renowned.”

For reservations and booking information, please contact The Ritz London’s Reservation Team on +44 (0)20 7300 2222 or at reservations@theritzlondon.com. You may also download the menu here

ABOUT FABERGÉ:
Fabergé, the world’s most iconic artist jeweller, creates extraordinary jewellery, timepieces and objets d’art, as well as bespoke commissions for a discerning international clientele. Founded in 1842, Fabergé has been the most revered name in jewellery ever since Peter Carl Fabergé became official goldsmith to the Russian Imperial Court; the house created exquisite jewels and objects, including the legendary series of lavish and ingenious Imperial Easter Eggs.

Today, Fabergé takes inspiration from its storied past to introduce a new era of enchanting and enduring personal possessions and gifts for contemporary connoisseurs. By painting with the world’s finest coloured gemstones, Fabergé explores a life in colour through creations which are designed to become future heirlooms. Current collections are available at Fabergé boutiques, By Appointment as well as at Harrods in London and other exclusive international retailers. Selected items are also available via Fabergé’s online boutique at Faberge.com.

Like all other Fabergé eggs, this one features a surprise when opened in the form of a removable miniature frame with relief profiles of Nicholas and Alexandra's five children in a cameo brooch style. The back of the frame is enamelled with a sepia basket of flowers, bordered with the year 1914 and the names of each of the Romanov children. The frame rests on a gold stand in the shape of the royal crown and is held in place within the egg by gold clips.

It was later confiscated, along with much of the family's belongings, by the provisional government in 1917 during the Russian Revolution, and in 1933 the egg was sold by the Soviet’s Antikvariat to an unknown buyer for 5,000 roubles. On 22 May 1933 it was purchased from Cameo Corner, London, by King George V for 250 pounds "half cost", most likely as a gift for Queen Mary’s birthday on 26 May. The Mosaic Egg remains a part of the British Royal Collection.

ABOUT THE RITZ LONDON:
The Ritz London, the iconic landmark conceived by renowned hotelier César Ritz, first opened its doors in 1906. Perfectly located in a landmark position in the heart of London’s West End, The Ritz is moments from the finest shopping destinations the Capital has to offer, including the luxury designer brands of Bond Street and Regent Street and the unique and quintessentially British boutiques of Jermyn Street. Throughout its distinguished history, the iconic hotel has been at the heart of London society and continued to play host to Royalty, aristocracy, stars of stage and screen and countless other discerning guests. The first and only hotel to have received a Royal Warrant from His Royal Highness The Prince of Wales, The Ritz has deservedly taken its place amongst the great hotels of the world and is the benchmark by which other hotels are measured. Most recently, The Ritz Restaurant was awarded a Michelin Star in the Michelin Guide Great Britain and Ireland 2019. Following refurbishment, it is sparklingly renewed though still retains the luxurious Louis XVI style interiors, meticulous service and the exquisite bar and restaurants for which The Ritz name is synonymous.

Fabergé collections are available online and in our international boutiques.