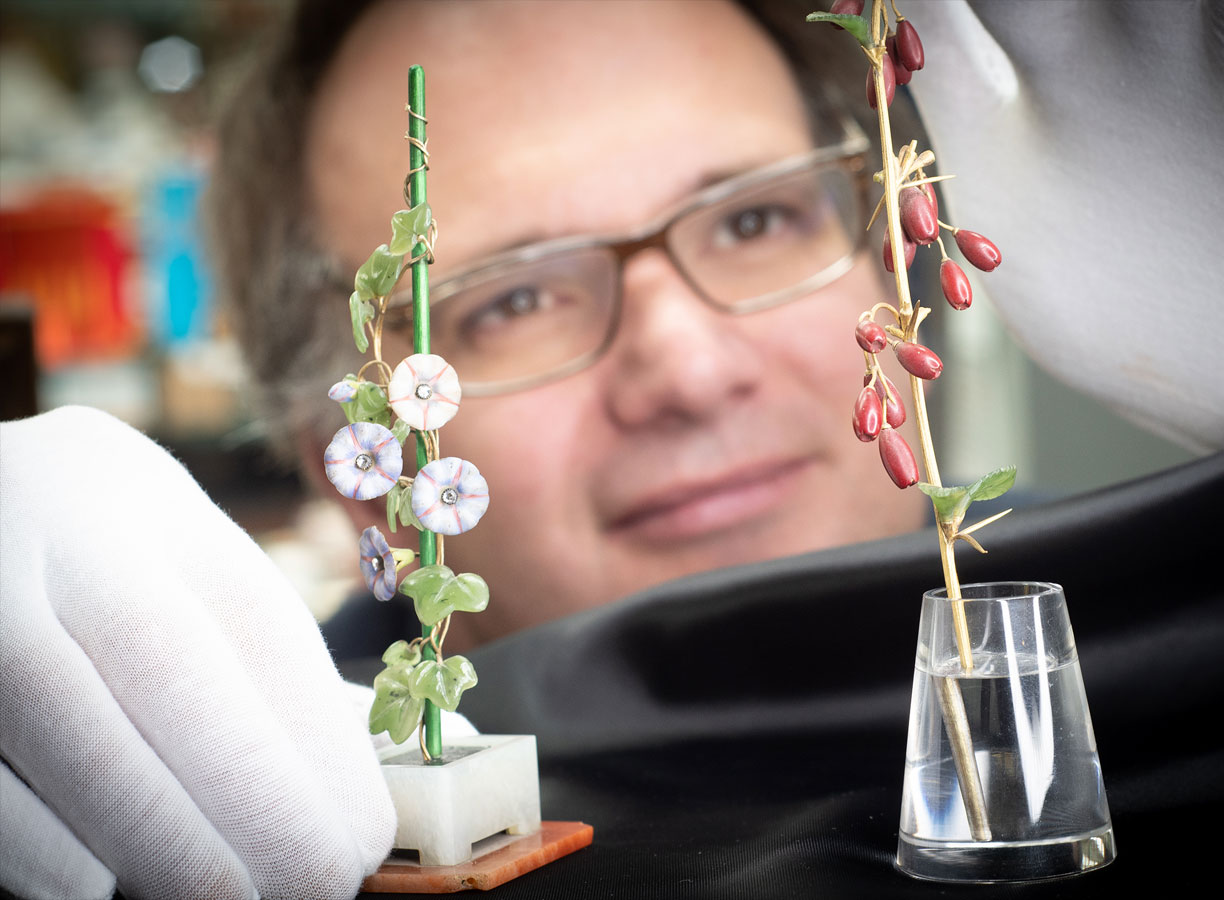 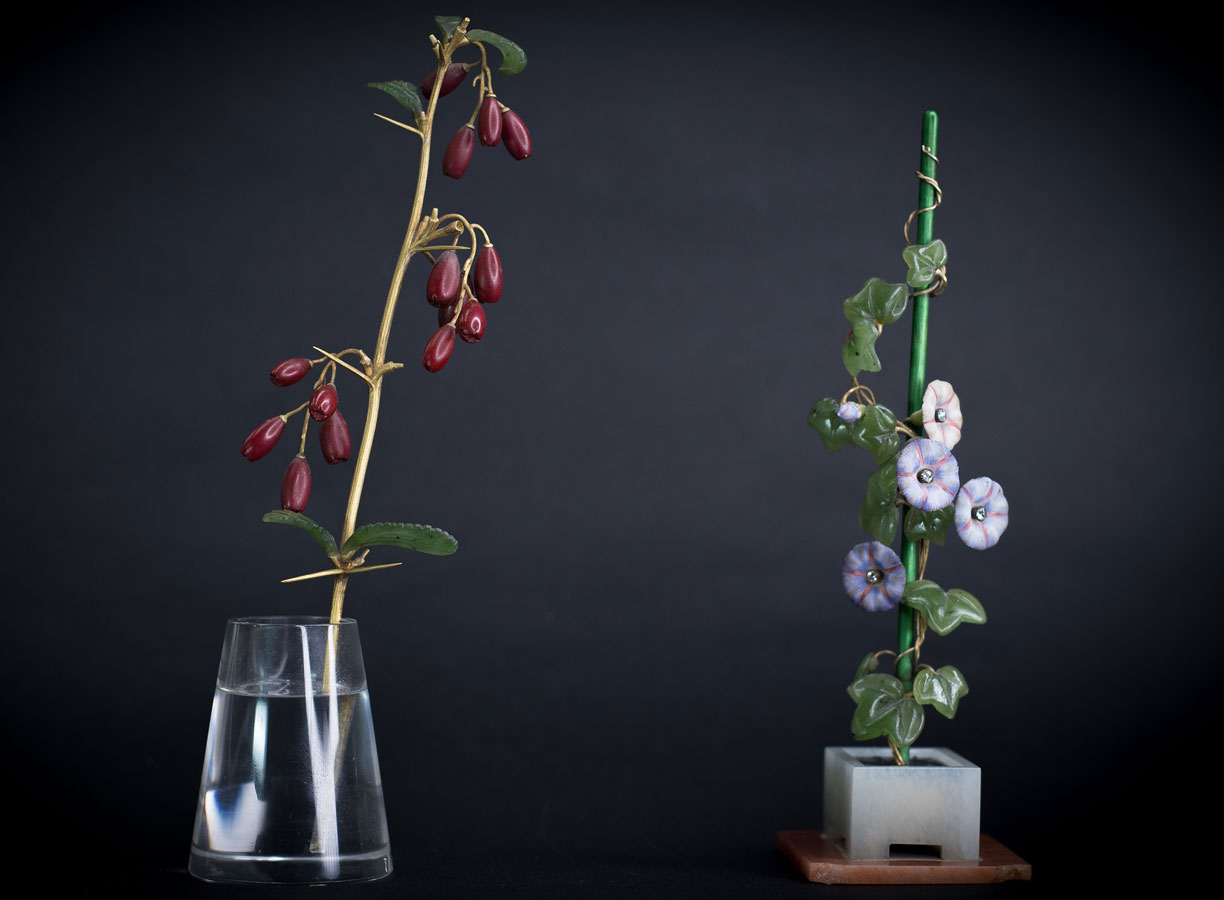 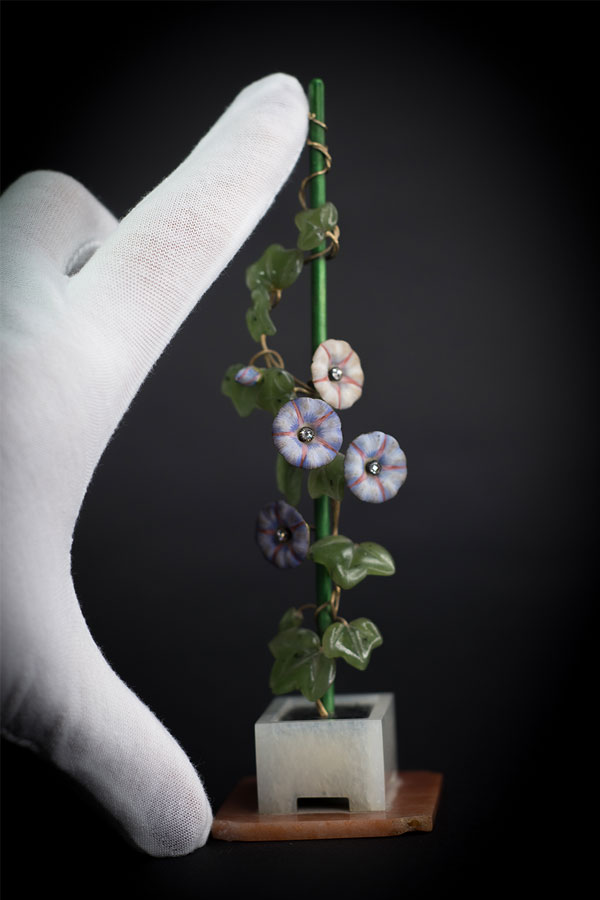 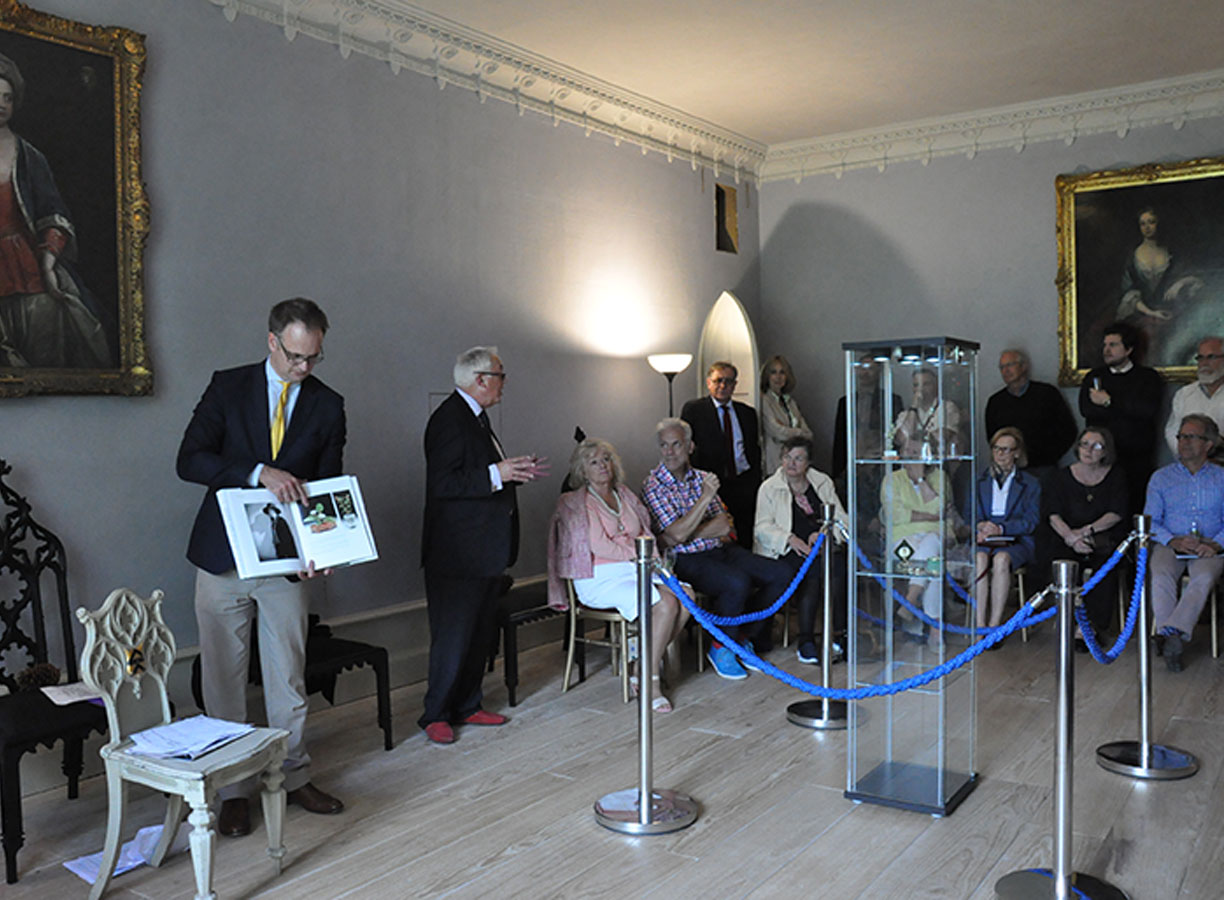 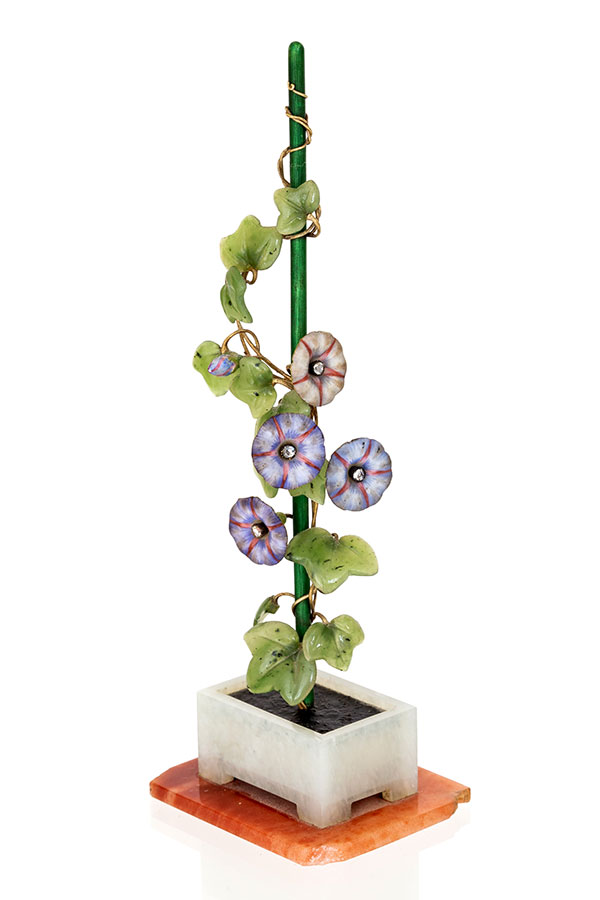 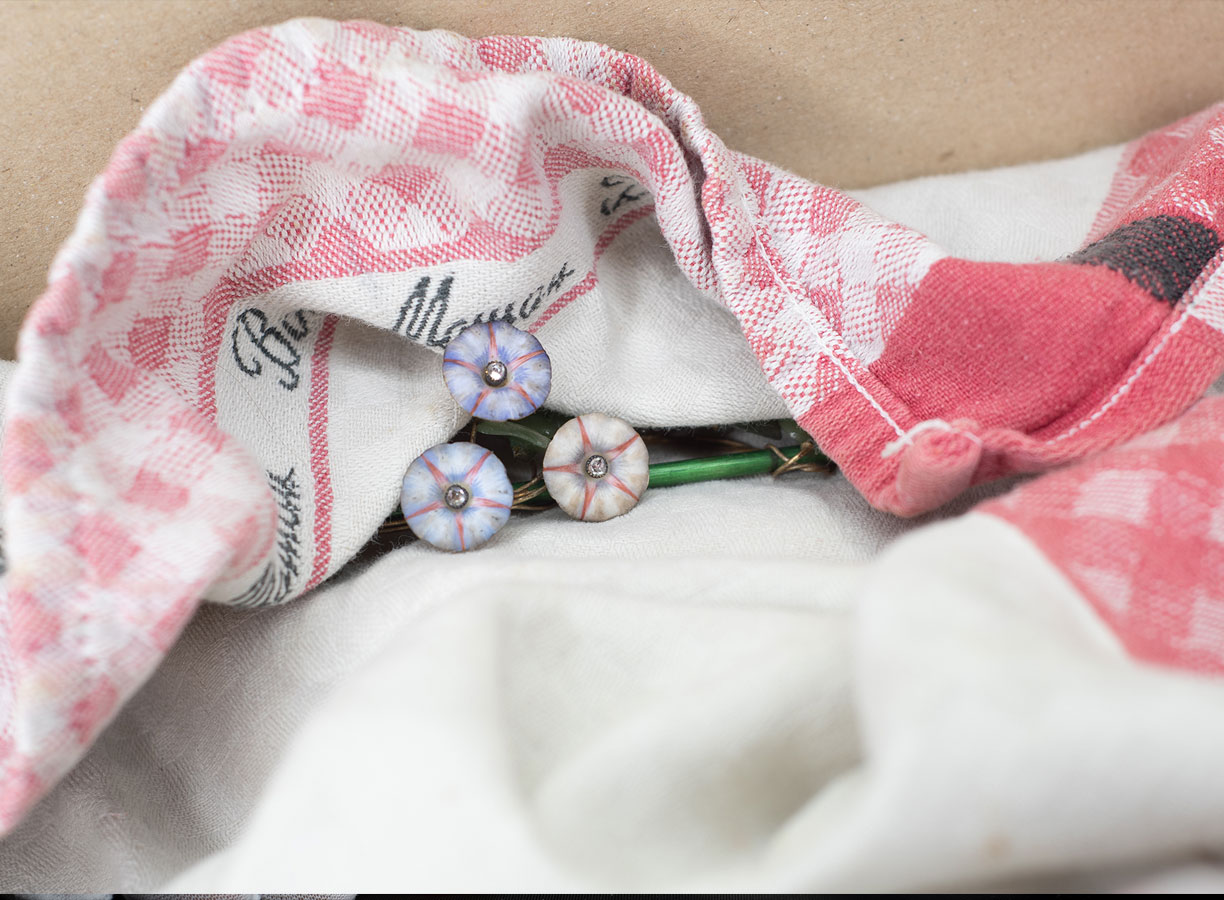 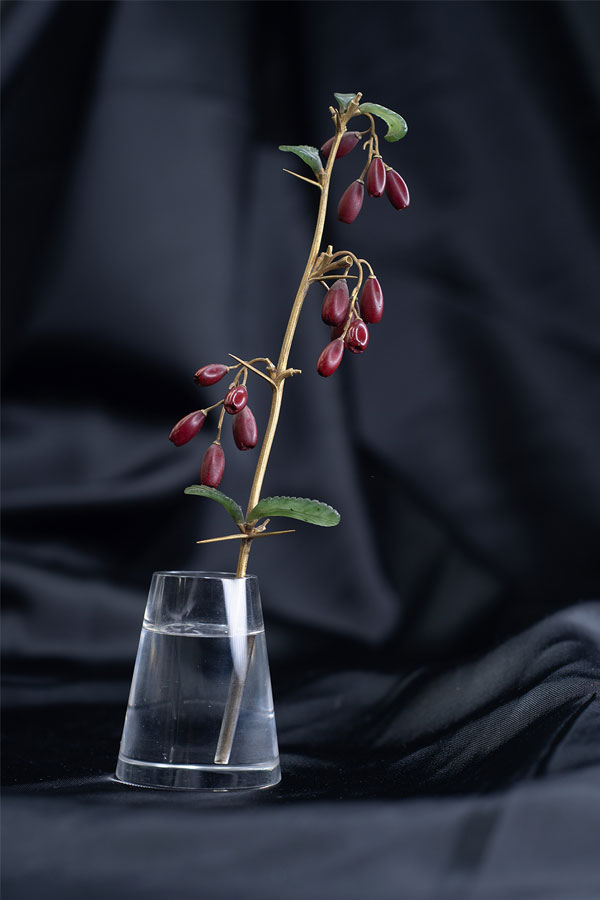 Last June we reported that there was great excitement at the filming of the Antiques Roadshow when two soldiers marched in wearing dress uniform and produced a beautiful Fabergé botanical study of pear blossom in a rock crystal vase. It was described as one of the most significant finds in the programme’s 40-year history and was given a £1 million valuation. It was not really a find as the piece was well-known to Fabergé scholars.

There has now been the real re-discovery of not one, but TWO Fabergé botanical studies unknown to 21st century Fabergé aficionados. Charles Hanson made the discovery at one of Hansons’ monthly valuation days at The Normanfield Theatre, a charming Victorian theatre at Teddington, a suburb on the Thames southwest of London. The hardstone, gold and bejewelled objets d’art were produced by a distinguished lady from a cardboard box and were wrapped in an old tea towel. He described it as his, ‘most significant find ever’.

The first study to make its theatrical appearance is an extremely rare one of a Convolvulus or Dwarf Morning Glory. The delicate climber is featured growing from the earth in a white hardstone pot which is supported on an adventurine quartz plinth. The stem and tendrils are gold and the heart-shaped leaves are carved from nephrite (Siberian jade). A green enamel cane supports the plant. The flower heads are embellished with painted enamels and centred with rose cut diamonds.

The second is of a twig from a barberry bush. Its thorny stem is gold, its leaves are carved from nephrite while its dark red acidic berries are formed from purpurine, This was first produced by the Imperial Glass Factory in the 17th century. and was subsequently reinvented by Fabergé. The appearance of being placed in water in a glass vase has been achieved by carving flawless rock crystal.

The provenance of the pieces is quite fascinating. A lady born into an aristocratic English family during 1859 acquired them later in life. She was The Honourable Constance Herbert (the ‘Hon’ as she was the daughter of a Baron). In 1878 she married the 4th Earl of Lonsdale. They had one daughter – Juliet - who was born in 1881.

The following year the Earl died. In 1885 Lady Lonsdale married the son of the 1st Marquess of Ripon. The son had the courtesy title Lord de Grey, so his wife became Lady de Grey. When the son inherited his father’s title in 1909, the couple chose to be still known as Lord and Lady de Grey as opposed to the Marques and Marchioness of Ripon. That marriage was childless.

Lady de Grey was a member of the ‘Marlborough House Set’ (the home of the Prince and Princess of Wales, later King Edward VII and Queen Alexandra). She was a great patron of the arts and her circle including Oscar Wilde and Nellie Melba. During the Edwardian era she became an influential hostess. She was also a friend of Queen and like her was a client of Fabergé’s London branch.

Henry Bainbridge, a manager of the London branch recalls in his book Peter Carl Fabergé – His Life and Work (1949) that the Queen sent him a cable and Lady de Grey caught him on the stairs leading to the Fabergé offices, both insisting on being the first to see Fabergé’s new stock. As he was about to explain his predicament to Lady de Grey there was a knock at the door. Bainbridge wrote, ‘I let in Chandler, the chief wardrobe keeper of the King, ’Ths King’s command’, he said. ‘Before you show anything to anyone he must see the lot, as he wants to find something for the Queen.’ And so my discomforture was complete.’

The two recently re-discovered pieces were displayed in 1935 at the now near-forgotten, The Exhibition of Russian Art at 1 Belgravia Square, London in aid of the Red Cross. Lady de Grey’s daughter, Lady Juliet Duff, lent them. Like her mother she was a great patron of the arts, her circle including the Terrence Rattigan and Hilaire Beloc. She was also a familiar face at Court, being a close friend of King George V and Queen Mary, both of whom were Fabergé enthusiasts.

The provenance in the catalogue read, ‘Lady Juliet Duff (1881-1865)’ and I presumed it was then by descent to the present owner. I was invited to the private view at Strawberry Hill House, the gothic mansion of Horace Walpole (1717-1797), the politician and man of letters. The vendor, who wanted to remain strictly anonymous, wanted to meet me. Along I went.

She was absolutely charming and great fun – let us call her Wendy. It transpired that the two studies were given to her father by Henry Talbot de Vere Clifton known as Harry. The Clifton Family were landowners in the North West of England. Harry Clifton (born 1907), was the last of the line. He inherited the Clifton Estate before his majority and broke the entail of it, thus gaining access to its capital. He spent as if there was no tomorrow.

He led an extravagant lifestyle, keeping permanent suites at the best hotels around the world. He also had a penchant for Fabergé and bought one of the Imperial Eggs – The Rosebud of 1895 – which was the first one Emperor Nicholas II gave to his wife the Empress Alexandra Fedorovna, the former Alix of Hesse, Queen Victoria’s favourite grandchild. The Cliftons reputedly used it as a missile during a marital dispute, but if true, it thankfully was not damaged.

It is not surprising that when in New York he visited Armand Hammer’s gallery L’Ermitage for having gone to the Soviet Union in the early 1920s, Hammer returned in the early 1930s with a cornucopia of Imperial treasures including Fabergé. Hammer first met Harry Clifford in 1934 when he spent $15,000 on Russian objects. In Hammer Witness to History, he describes Clifton as being somewhat scruffy and ‘whose wild hair looked as if a porcupine had run through it’. When they checked Clifton’s credit, it was discovered he was one of England’s wealthiest men with an income of over $10,000 a day.

Wendy’s father had undertaken some work on Clifton’s Scottish estate, but when it was time to settle his account, Harry could not do so. Being a successful businessman, Wendy’s father accepted a cottage and three pieces of Fabergé in lieu of the sum due. This was in the early 1960s

Wendy inherited the studies from her father. She believed they were Fabergé, but did not appreciate their potential value until the Antiques Road show ‘discovery’ of the pear blossom study was broadcast. Indeed, they were openly displayed in her home and were not insured. Harry Clifton grew increasingly eccentric and plundered the Clifton estate. He died penniless in 1979 at Brighton, England.

Only about 80 of Fabergé’s botanical studies are known to have survived. They are among the most beautiful objects produced by Fabergé.

Fabergé collections are available online and in our international boutiques.