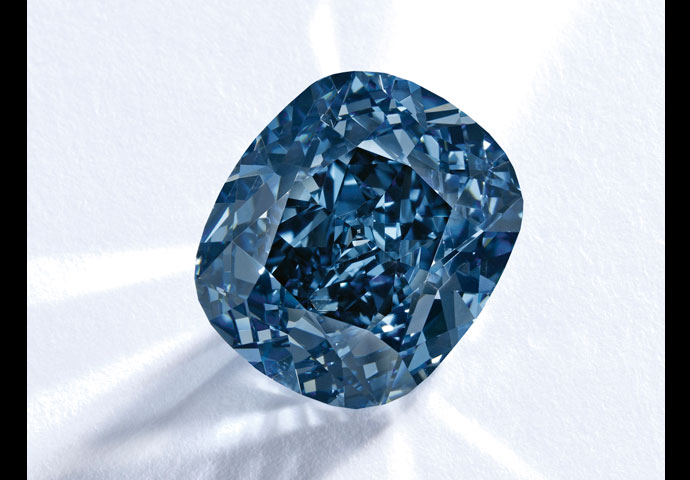 History was made at Sotheby’s auction in Geneva this week when the extraordinary Blue Moon diamond became the most expensive gemstone in the world. The Blue Moon was sold for a record $48.5m (£31.7m) at the “Magnificent Jewels and Noble Jewels” auction in Geneva. The sale price is a record for any gemstone and also per carat (over $4 million per carat). The diamond was purchased by a private collector from Hong Kong who renamed it “The Blue Moon of Josephine”.

It was expected that the jewel would fetch between $35m and $55m and its final price surpasses the $46m record set by “The Graff Pink” five years ago. The 29.62-carat diamond was found in the Cullinan Mine in South Africa in January last year, a rare find, as blue diamonds make up only 0.1% of diamonds unearthed at the mine. It was then cut and polished in New York, a skilled process that took six months and eventually produced a 12.03-carat vivid blue gem. Almost all diamonds have tiny traces of non-crystallised carbon – the element from which they are formed. But the Blue Moon Diamond has no inclusions and has been officially declared flawless. It was named the Blue Moon Diamond by sellers Cora International, as a tribute to its rarity.

Its record price comes the day after a spectacular pink diamond, the largest of its kind to ever appear at auction, was sold for £18.8m ($28.5m) by auction house Christie's in Geneva.

For more information about the Blue Moon Diamond, visit: www.sothebys.com.