On the morning of 22 June 2016 Christie’s offered the late Joan Rivers’ personal jewellery and objets d’art as well as porcelain, silver, carpets, paintings, carpets and gowns at its rooms at 20 Rockefeller Plaza, New York. The sale totalled $2,199,125. Further jewellery and personal effects were offered at an on-line auction. 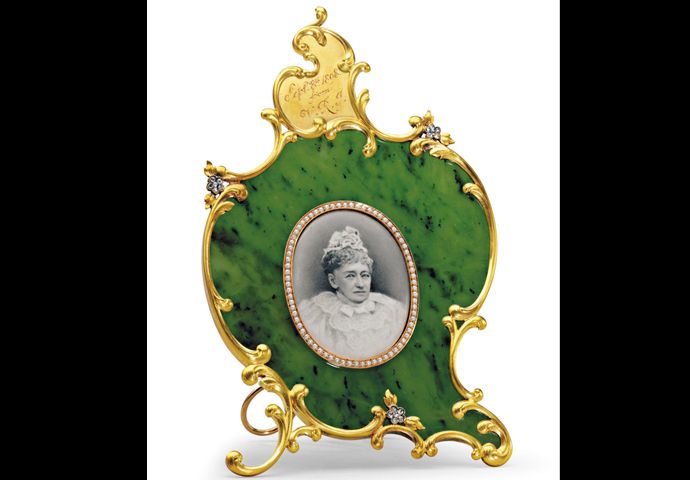 A gift from Queen Victoria to Queen Louise of Denmark.
Created at Fabergé’s Moscow workshop in 1898, it sold for $245,000

The top lot was a jewelled gold-mounted nephrite photograph frame in the rococo style. It was a creation from Fabergé’s workshop in Moscow. As revealed by the gold scrolled plaque surmounting the piece, it was a gift on 8th September 1898 from Britain’s Queen Victoria as indicated by the Initials VRI – which is an abbreviation for the Latin Victoria Regina Imperatrix. This translates into English as Victoria, Queen Empress, for in addition to being the monarch for Great Britain, she was also Empress of India.

The recipient was Queen Louise of Denmark, who is the lady featured in the frame. The bezel of the aperture is set with seed pearls. Although the portrait appears to be a photograph, it is in fact an enamel plaque. As this was a gift from the British Sovereign to a Danish Queen, it attracted bidders. Normally the regal residents of Buckingham Palace were recipients of Fabergé from royal relatives overseas. The piece was contested to $245,000 against an estimate of $40,000-60,000. 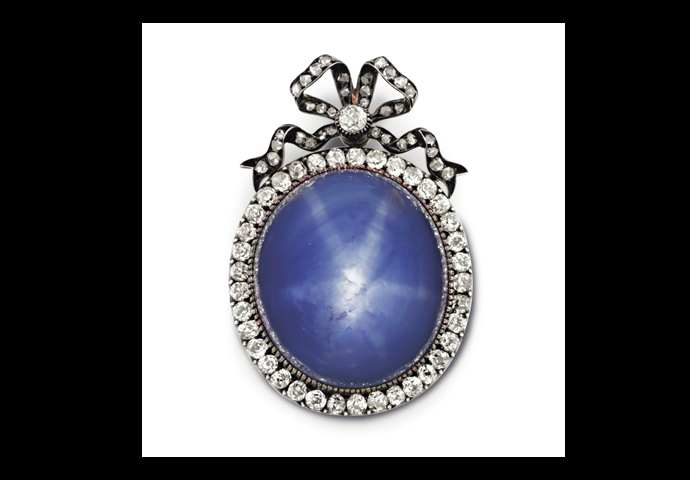 This star sapphire and diamond pendant brooch once belonged to Grand Duchess Maria of Russia. It realised $75,000

Top price for a piece of jewellery in the sale was for an impressive Fabergé star sapphire and diamond pendant brooch. It was once in the collection of the Grand Duchess Maria of Russia (1847 - 1909), whose passion for jewels was legendary. It sold just above its lower estimate at $75,000. 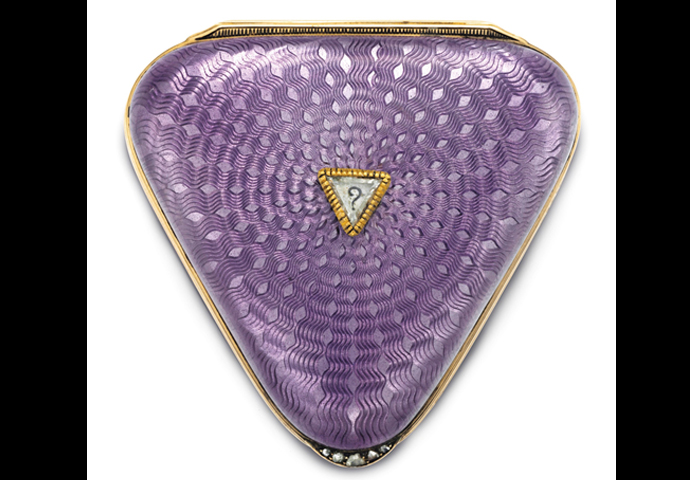 This pill box was purchased from Fabergé by the Dowager Empress Maria Feodorovna in 1898. It sold 118 year later for $30,000

A gold, silver-gilt and jewelled pill box enamelled in translucent lilac over a radiating wavy guilloché ground was sought. Its hinged cover with a rose-cut diamond thumbpiece is centred with a triangular plaque painted with a question mark viewed through a picture diamond. It is not the intriguing question mark that generated the interest, but the fact that the box was purchased by the Dowager Empress Maria Feodorovna on the 21st December 1898 for 115 roubles. 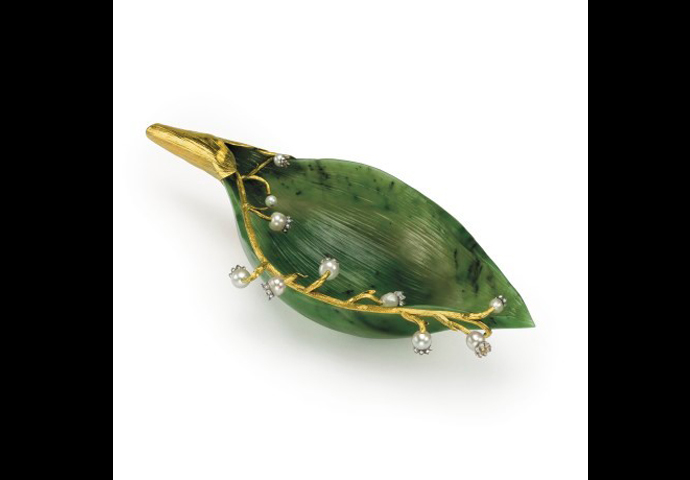 Of the 217 lots in the bricks and mortar-based sale, 22 were Fabergé objects and of these 16 sold. The highlight of the Fabergé section, a rare and important jewelled and gold mounted nephrite study of a lily of the valley leaf was a casualty. The $200,000-300,000 estimate for an unmarked object 14cm (5½in) in length was punchy, but there is no doubting that it is a great rarity. Christie’s commented that it, ‘had received some pre-sale interest, but unfortunately it did not find a buyer during the sale’. 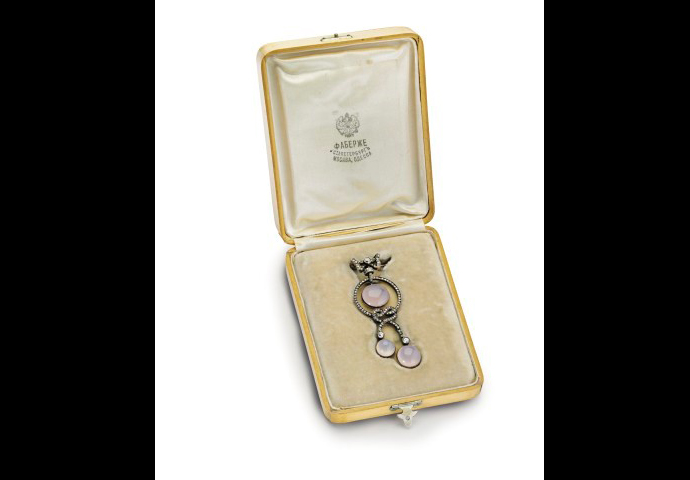 This exquisite brooch was estimated at $40,000-60,000, but no one was tempted. Below John Andrew of our Heritage Council reveals its financial history in the 1990s

There was also no interest in a gold, silver, chalcedony and diamond brooch by the Fabergé workmaster Albert Holmström. Described by one commentator as ‘exquisite’, we agree. Indeed, from 1990-1999 it was in the collection of John Andrew of our Heritage Council. John comments, ‘I remember the sale at which the brooch appeared well. It was at Christie’s in New York on 19 April 1990. The highlights were The ‘Bonbonniere’ Egg created in 1903 for Mr & Mrs Kelch and a rather fine hardstone figure of a merchant. Neither sold.’

In fact nearly 60 per cent of the lots by value failed to sell. This brooch was the only piece that interested me, but I thought the estimate of $6000-8000 was a “tease” and that it would sell for more. In fact it sold at its top estimate – that is $8800 with the Premium, then just under £5000. A friend who had viewed the sale said it was a stunner, and advised that a dealer friend of mine had bought it. I asked him if I may have first refusal. He offered it to me unseen for £6000. I agreed.’

‘When it was delivered to him he said, “Had I realised that it was such a corker the price would have been more.” I had it professionally lightly cleaned and it looked even better. When I sold my collection in 1999, it was the one piece of jewellery I was sorry to see go. I think it sold for £12,000. The reason it did not fly in 1990 was that there had been some catastrophe on the Tokyo financial markets.  The brooch was offered with an estimate of $40,000-60,000.

NOTE: All prices include the Buyer’s Premium unless otherwise stated. All images courtesy of Christie’s.