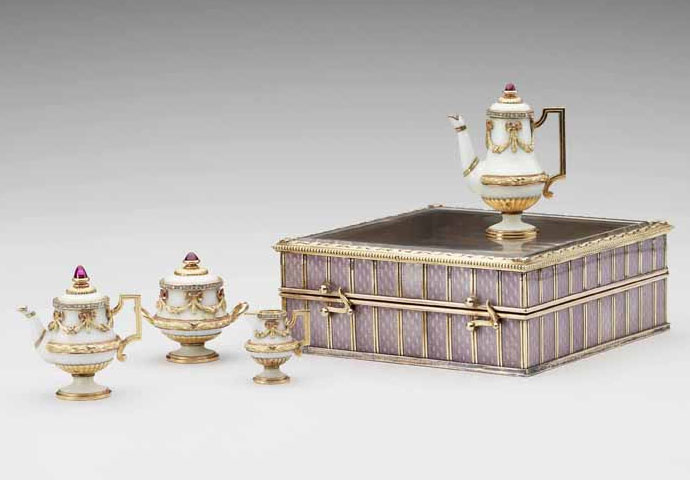 The Royal Collection of Fabergé is not only one of the largest in existence, but is also one of the most important. This is because the nucleus of the collection was either acquired by Queen Alexandra and King Edward VII direct from Fabergé or was given to them by relatives or friends who also bought the pieces from the same source. Subsequent members of the Royal Family, including HM Queen Elizabeth II and HRH The Prince of Wales, have added to the collection. It includes everything from crochet hooks to Imperial Easter Eggs, as well the world’s largest menagerie of Fabergé hardstone animals and a group of flower studies. The exhibition of over 100 masterpieces also includes pieces not previously exhibited. 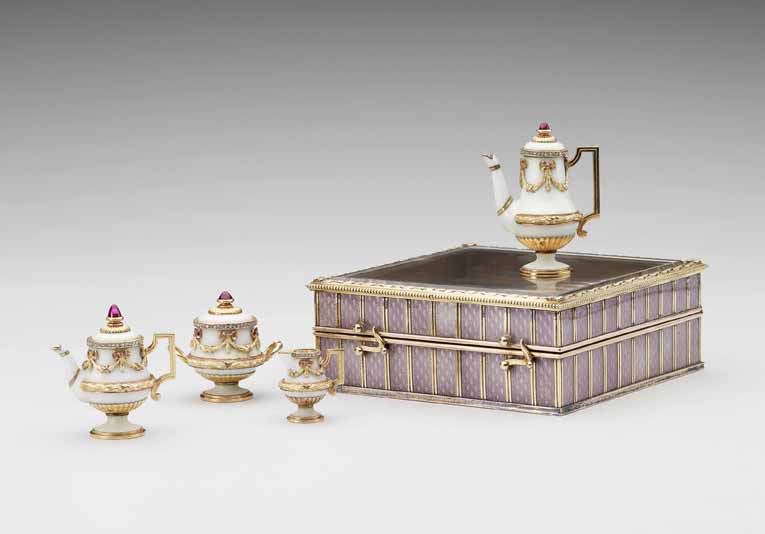 Tatiana Fabergé’s favourite piece is making its debut. ‘Last year I was shown this beautiful miniature four-piece tea service that belonged to Queen Alexandra. Made of silver gilt, the teapot is just 2.7cm high and the body of all the pieces have white opaque enamel realistically imitating porcelain. They are delicately decorated with finely chiselled garlands and swags. It is an absolute gem housed in a beautiful fitted box!’, she said. 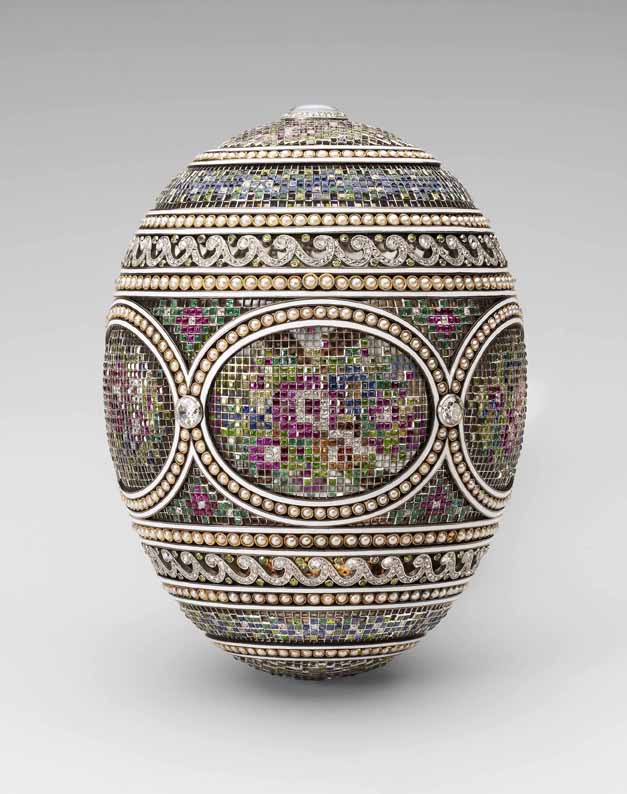 Katharina Flohr our Creative Director and Managing Director, chose an old friend. ‘The Mosaic Egg of 1914 has always been my favourite – it is a masterpiece of the jewellers’ art and is so beautiful’, she sighed. Inspired by a piece of petit point Alma Pihl its designer was making for her wedding trousseau, the stones are set in a hand cut platinum frame so that no single one projects above another. To achieve this, the stones have been calibrated so that their tables follow the curve of the Egg. It is also a superb example of invisible setting, undertaken before the term was even invented.

The Stories Behind the Objects 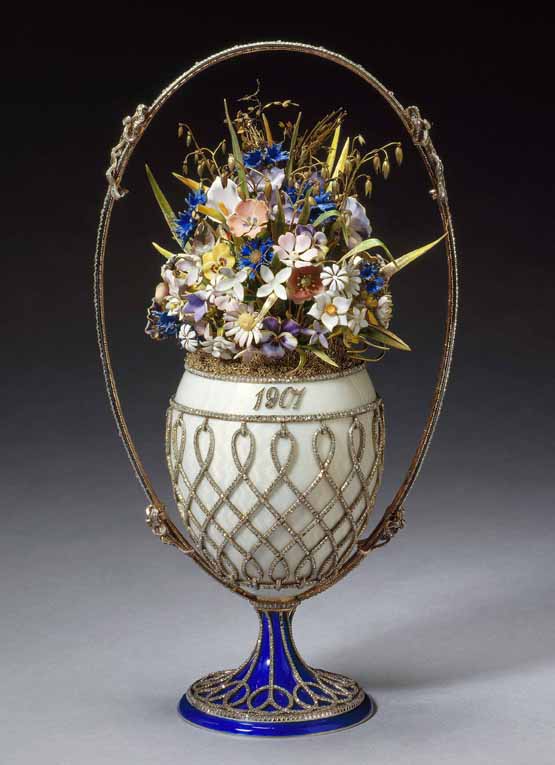 The Basket of Flowers Egg

This Imperial Easter Egg is designed as a vase containing a profusion of wild flowers, which are enamelled on gold in a variety of colours. It was given to the Empress Alexandra Fedorovna on Easter Day (1 April, 1901) by her husband, Emperor Nicholas II. This Egg has not had a smooth passage through time. In the Moscow Kremlin Armoury Inventory of 1933, the Soviets noted that, ‘the enamel on the leaves and in two places on the basket is damaged.’ Presumably this happened after the Revolution. Then in 1949, Henry Bainbridge, a former manager of the London branch of Fabergé and the first person to devote a book on Fabergé, declared in his Peter Carl Fabergé – Goldsmith and Jeweller to the Russian Court – His Life and Work that ‘This is not an Imperial Easter Egg, and for whom it was made is not known’. Thanks to Tatiana Fabergé in The Fabergé Imperial Easter Eggs (also co-authored by Lynette G Proler and Valentin V Skulov) its Imperial provenance was re-established and therefore the Royal Collection boasted three as opposed to two Imperial Eggs. However, the research for this volume also established that the pedestal was originally enamelled white. This has been proved by identifying the Egg in a photograph of the 1902 von Dervis mansion exhibition held in St Petersburg during 1902. The pedestal had clearly become damaged at some point and had to be re-enamelled. Queen Mary acquired the Egg in 1933. As there is no invoice in the Royal Collection, it is thought it may have been a gift. 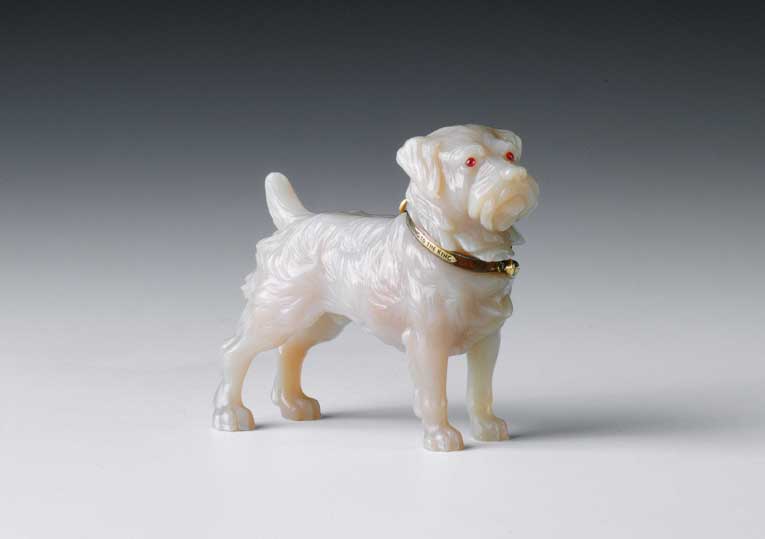 King Edward VII’s initial idea for the ‘Sandringham Commission’ of hardstone animals was for Fabergé to immortalise his favourite dogs and racehorses. The actual commission extended to all the animals on the Sandringham Estate. As King Edward doted on Caesar, he was arguably the most important subject of the commission. Indeed, when His Majesty unveiled the wax models Fabergé’s team had prepared on the Norfolk Estate, Caesar was at his side. The actual carved stone model was not delivered to England until several months after the King’s death. Carved from chalcedony and embellished with gold, enamel and rubies, it was purchased from the London branch of Fabergé by the Honourable Mrs Greville, a close friend of Queen Mary, for £35. She gave the model to Queen Alexandra. As with the actual Caesar, the dog’s collar reads, ‘I belong to the King’. After Edward VII’s death in May 1910, Caesar wandered the corridors of Buckingham Palace looking for his master. His last duty was to walk behind the King’s coffin led by a Highlander. Caesar died in 1914 and is buried in the grounds of Marlborough House, the London residence of Edward, Prince of Wales, before he became King Edward VII. 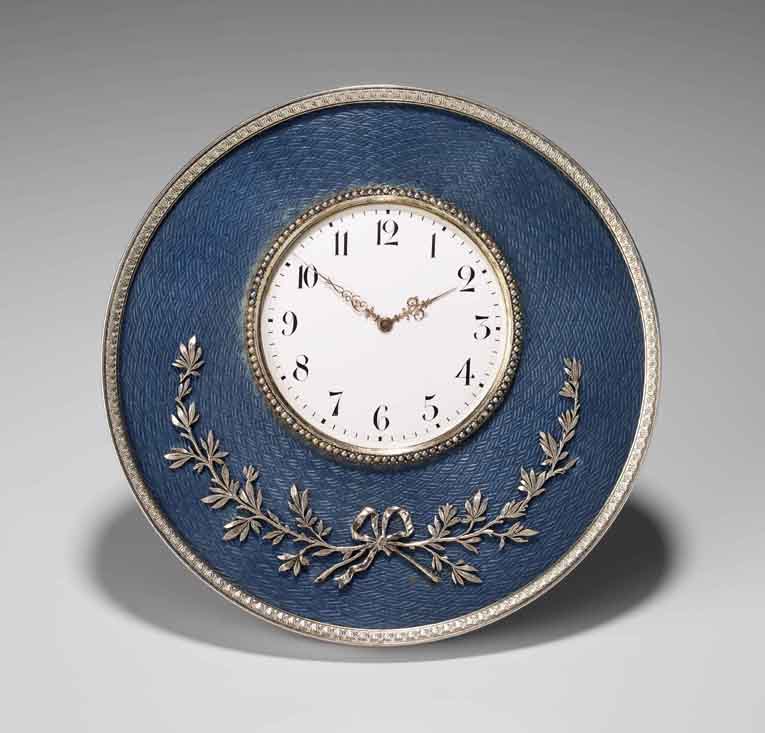 This clock was made in the workshop of Fabergé’s work master Henrik Wigström. While the hands of the clock are gold, its body and mounts are made of silver. The front of the clock is decorated with Prussian blue guilloché enamel and the bezel is set with seed pearls. The Swiss company H Moser & Cie supplied the clock’s movement to Fabergé. Her majesty purchased the clock from Wartski in London during March 1959 for £430. Adjusting the sum paid for the UK’s inflation over the last 50 or so years, this is equivalent to about £7300 in today’s money. However, in certain parts of the UK in the late 1950s, you could buy a reasonable three-bedroom house for £430. The value of the clock today on the antique market would be around £150,000, or even more. 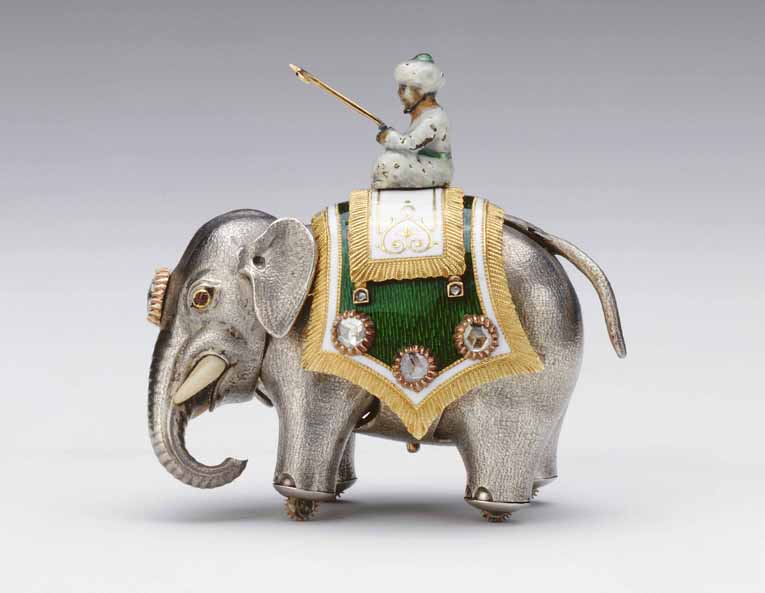 This was presented to King George V by his family in 1929. It is not known when this piece was made, or for whom. Crafted in gold and silver and embellished with guilloché enamel, rose diamonds, cabochon rubies and ivory, like the majority of Fabergé’s automata, it is wound by a gold key. When placed on an even flat surface, it walks swinging both its head and its trunk. The piece is kept, when not exhibited, in its original Fabergé Hollywood fitted case with its key and the operating instructions written in the hand of Queen Mary. 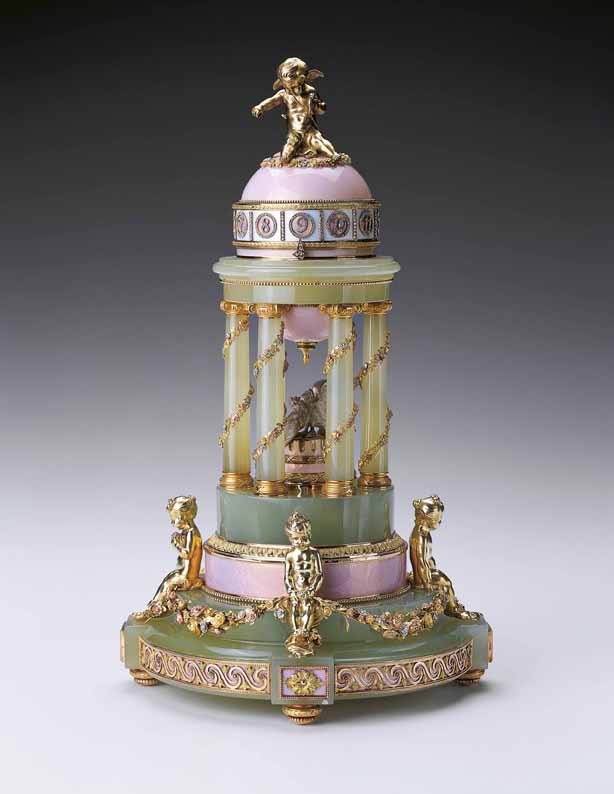 Only three of the Fabergé Imperial Easter Eggs are timepieces. The Colonnade Egg features a clock which is in the form of a pink guilloché enamelled gold egg with a revolving chapter ring. The Arabic numerals are set with rose-cut diamonds as is the arrowhead that indicates the time. According to the original Fabergé invoice, the piece is ‘in the form of a summer–house’. Today it is consider it more appropriate to describe the piece as being modelled on a Greek Temple of Love, as it is so rich in symbolism. The four cherubs on its base holding a varicoloured gold floral garland represent Olga, Tatiana, Maria and Anastasia, the daughters of the Emperor Nicholas II and the Empress Alexandra Fedorovna. The cherub that surmounts the piece represents the six-year-old Tsarevich Alexei, who is pointing to the time.

The love theme of the Egg is continued behind the six pale green bowenite columns, which are wound with gold floral garlands and terminate in gold Ionic capitals. Inside there are two platinum doves to symbolise the Imperial couples’ enduring love for each other. Queen Mary acquired the Egg in 1933, but as there is no invoice in the Royal Collection, the piece was probably a gift to the Queen. 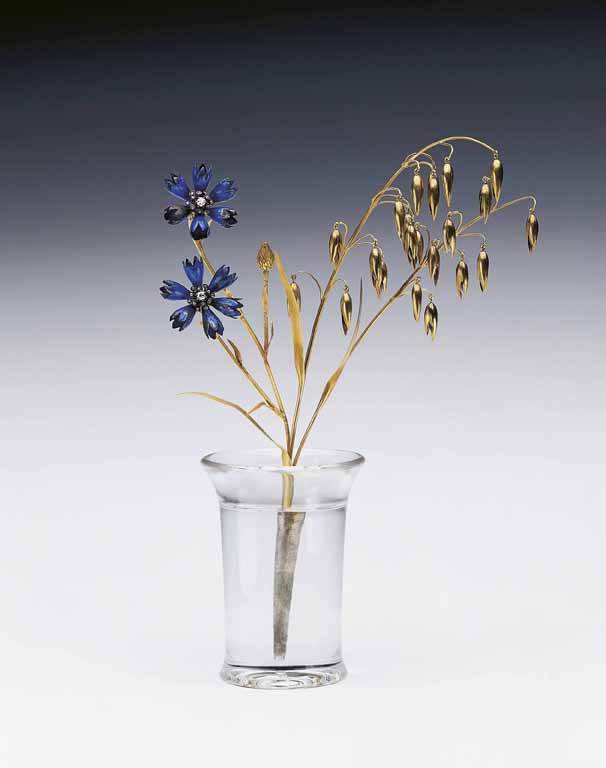 The Royal Fabergé Collection contains 26 flower studies, a number that no other Fabergé collection in the world can even begin to match. This study of cornflowers and oats is one of Fabergé’s most exquisite creations. It was purchased by Queen Elizabeth and Queen Mary, respectively the mother and grandmother of the present Queen Elizabeth II (then Princess Elizabeth), on 27th June 1944. Queen Elizabeth described it as ‘a charming thing and so beautifully unwarlike’. The piece was purchased to cheer up Princess Elizabeth’s ‘shelter room’ at Buckingham Palace – hence the reference to ‘unwarlike’. 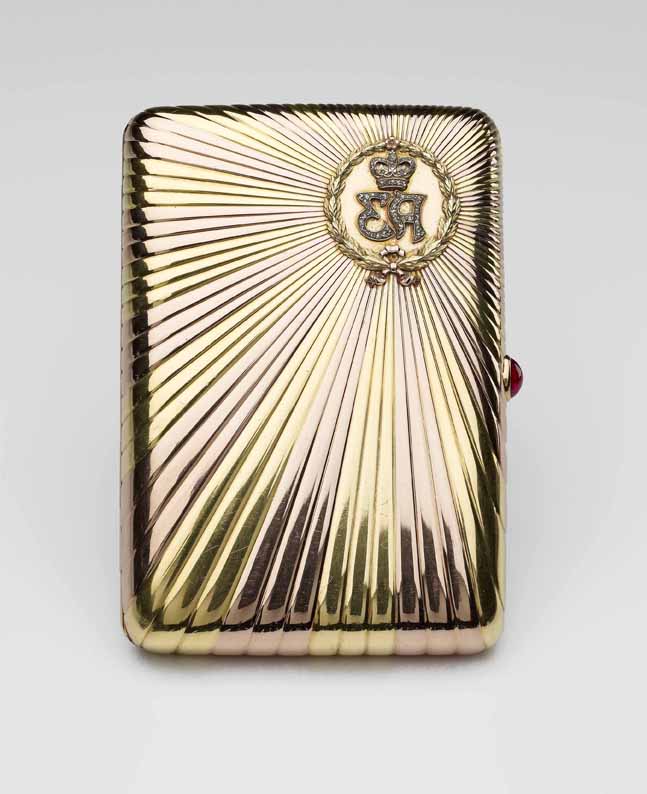 This elegant red, yellow and white gold cigarette case, which bears the cipher of Edward and Alexandra in diamonds, was given to King Edward VII on the occasion of his 40th wedding anniversary. His sister-in-law, the Dowager Empress Marie Fedorovna, gave it to him. 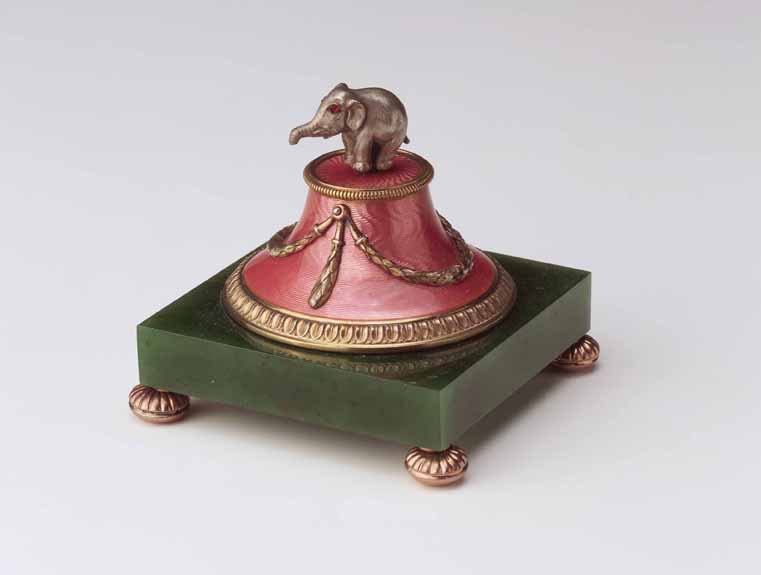 This bell push, which is surmounted by an elephant, was given to Queen Alexandra by her sister Dowager Empress Marie Fedorovna. 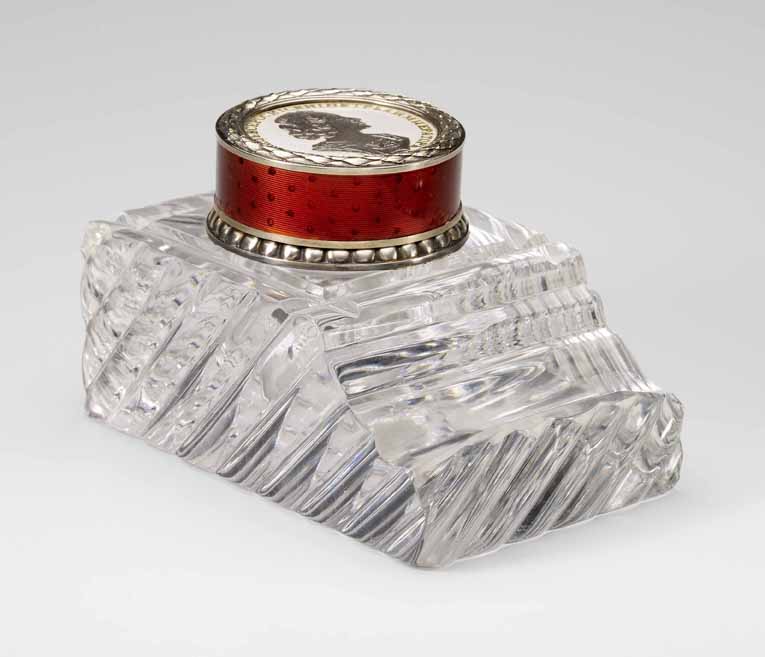 This inkwell was a gift to Queen Elizabeth II and his HRH Prince Philip, Duke of Edinburgh (then respectively Princess Elizabeth and Lieutenant Philip Mountbatten, who was born Prince Philip of Greece and Denmark). It was given on the occasion of their wedding on 20th November 1947. It may look as if its body is made of crystal glass, but it is in fact the semi precious stone rock crystal, or ‘quartz, crystalline’. Although rock crystal is a common mineral, this is a perfectly clear example and thus rare. It is mounted with a gadrooned silver collar that has been enamelled red over a guilloché ground. The hinged cover with its border of laurel wreaths has been set with a gold rouble of Catherine the Great dated 1722. The field of this coin has been enamelled white. The gift was received from Baroness Sophie Buxhoveden, who had been Empress Alexandra Fedorovna’s favourite lady-in-waiting. Following her escape from Russia, she eventually settled in London and was granted a Grace and Favour apartment by the British Royal Family at Kensington Palace. The Baroness acted as an unofficial lady-in-waiting to the Dowager Marchioness of Milford Haven, who was also of Russian descent, her paternal grandfather being Grand Duke Michael Nikolaevich of Russia, the youngest child of Emperor Nicolas I. 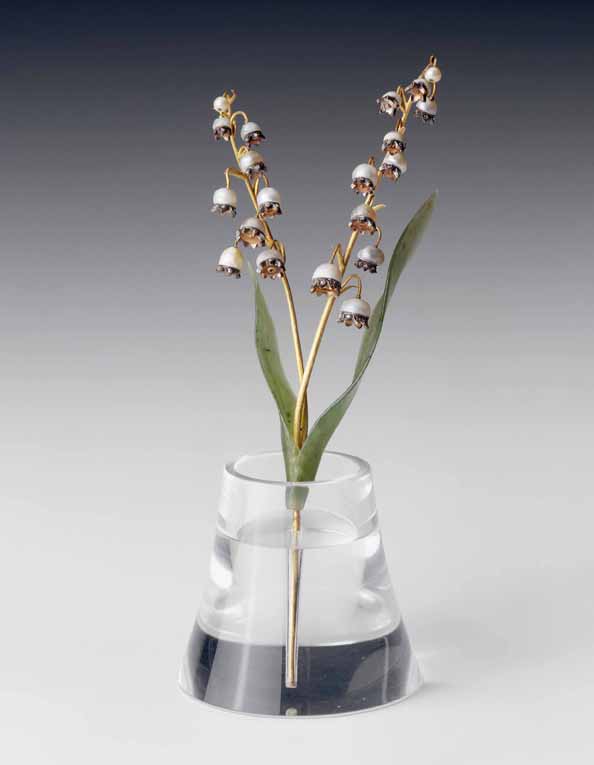 Lily of the Valley Study

'Lily of the Valley' were the favourite flowers of Empress Alexandra Fedorovna and it is not surprising that they feature in Fabergé’s repertoire from jewellery to Imperial Easter Eggs. This piece, which was made in the early years of the 20th century, is crafted from rock crystal, gold, nephrite, pearls and rose diamonds. It was originally purchased by Queen Alexandra. 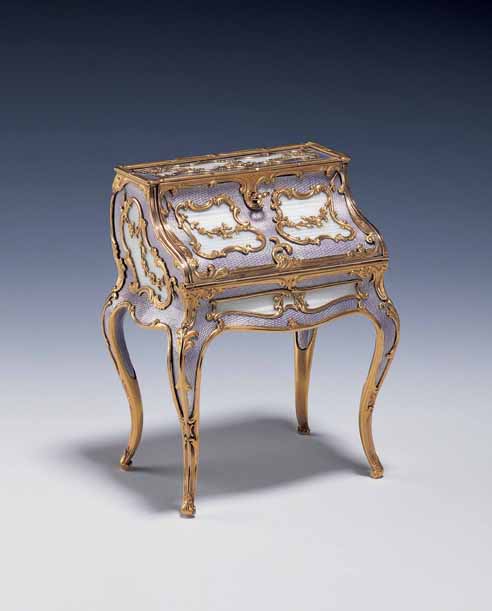 This Louis XV-style miniature roll-top desk was originally purchased by Leopold de Rothschild from Fabergé’s London branch on 12 July 1908 for £150.15s (£150.75). Crafted from two-colour gold and embellished with guilloché enamel, it opens with a miniature gold key, revealing an interior lined with engraved mother-of-pearl that divides it into compartments. King George VI acquired the piece for his wife Queen Elizabeth in 1946.