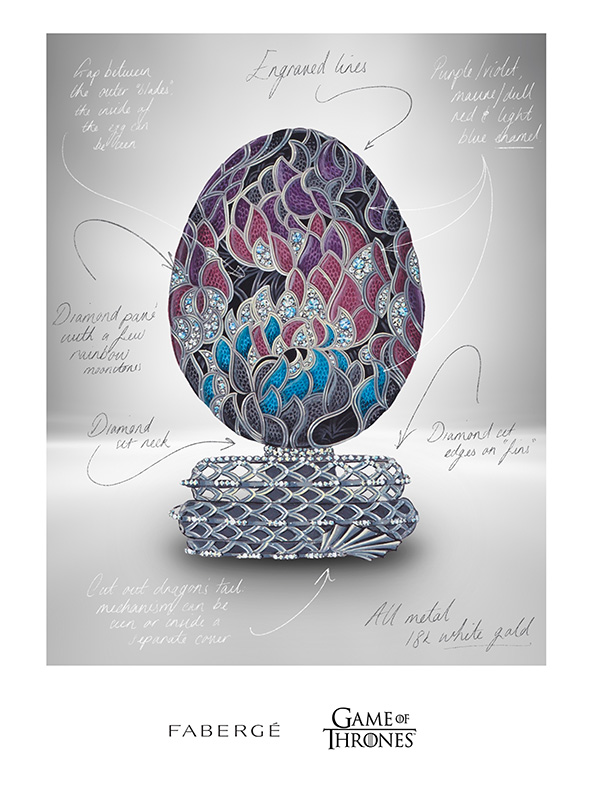 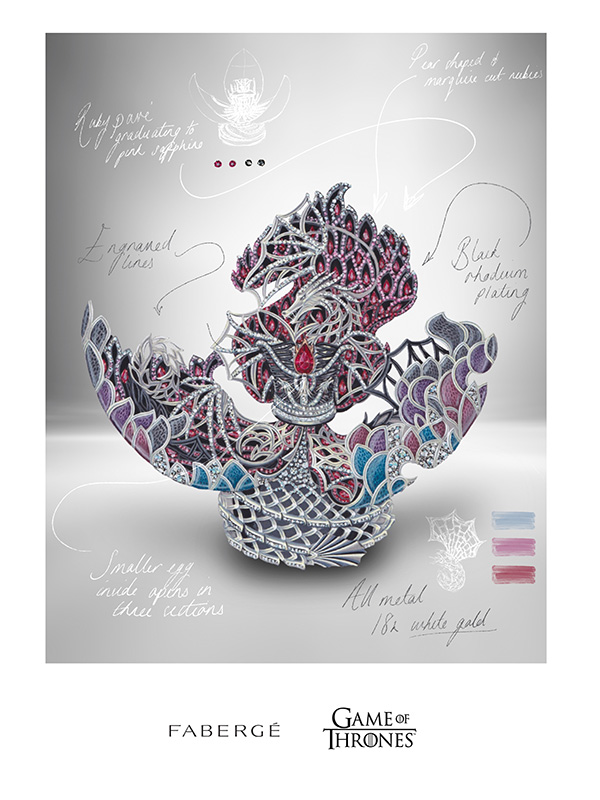 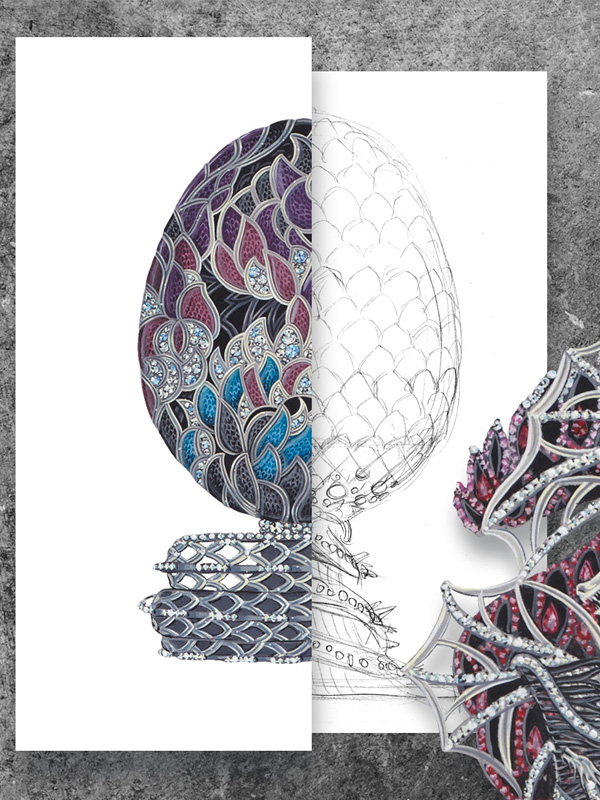 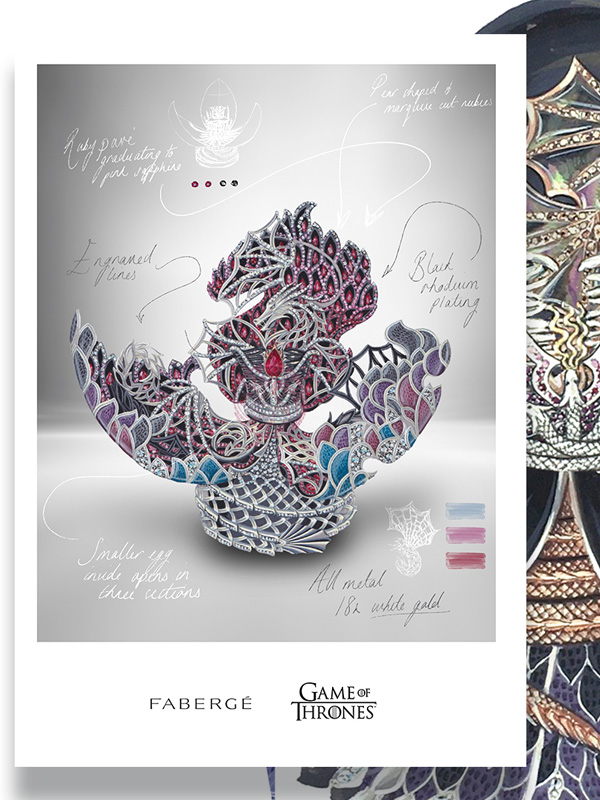 This April, we are hatching a new surprise collaboration with Warner Bros. Consumer Products to commemorate the extraordinary story of HBO®’s award-winning television series, Game of Thrones, fusing our superior craftsmanship and artistic ingenuity with one of the 21st century’s most iconic TV series.

Co-designed by our Designer, Liisa Tallgren and Michele Clapton, the Emmy® and BAFTA® winning costume designer from HBO®’s Game of Thrones, this one-off work of art is history in the making and offers a unique opportunity for one individual to acquire a modern day heirloom for future generations.

The timing couldn’t be better, with April 2021 seeing Game of Thrones celebrate the 10th anniversary of its debut episode – a major milestone dubbed “The Iron Anniversary”. This global year-long celebration will be a chance for fans to revisit the most unforgettable moments of the world’s biggest television series, and the jewel in the crown will be the Imperial Class Fabergé Game of Thrones Egg.
Our Designer, Liisa Tallgren worked closely with Game of Thrones’ Costume Designer Michele Clapton to create an intricate and enchanting design which tells the tale of Daenerys Targaryen’s quest to take her place on the Iron Throne.

“From the very beginning, the evolution of this egg objet has been truly poetic. The design references Daenerys Targaryen’s incredible journey and the importance of colour within her costumes, her passion for her dragons, and the way she portrayed messages via her jewellery throughout her journey on the show. References from the textures of the dragons and their iconic eggs were used to inform the surfaces of this egg objet.” Michele Clapton.

This one-of-a-kind bespoke creation is symbolic of Daenerys’ dragon eggs, while intertwining subtle nods to her stand-out costumes which celebrate the landscape around her and her evolving story arc. The design choices are informed by Daenerys’ journey from orphaned exile to conquering monarch and her ongoing quest for the Iron Throne.

Continuing Fabergé’s long tradition of combining the expected with the unexpected, this piece holds even more tales within. The egg opens to reveal a beautiful surprise in the form of a crown sat majestically atop a glistening crystal base. This is a miniature version of the crown that would have been presented to Daenerys should she have held the Iron Throne, set with a pear-cut ruby
responsibly sourced from Gemfields’ Montepuez ruby mine in Mozambique.

“I knew instantly what the secret gift should be, there was never a doubt; it had to be the crown that Daenerys believed throughout her life was her destiny. With the crown, I referenced her dragons, their wings sweeping around protecting the beautiful Gemfields ruby that represents Daenerys, her house colour, and her fierce quest to rule.” Michele Clapton

Josina von dem Bussche-Kessell, Global Sales & Business Development Director at Fabergé says: “Fabergé has an unrivalled ability to commemorate significant milestones with its objets d’art, that tell tales of intrigue and mystique. We are delighted to pay tribute to the modern-day legend that is the Game of Thrones series. Rarely has a story captured the imagination of so many people around the world, and this one-off piece is a once-in-a-lifetime collector’s item. The partnership with Warner Bros. and Michele Clapton showcases Fabergé’s relevance today by encapsulating the ‘Zeitgeist’ of storytelling and artistry.”

Fabergé has a long-standing history in dutifully designing and producing bespoke commissions for royal households around the world, and this latest egg objet follows this tradition in a uniquely enchanting way. Sales enquiries can be directed to the Fabergé ‘By Appointment’ team via sales@faberge.com.