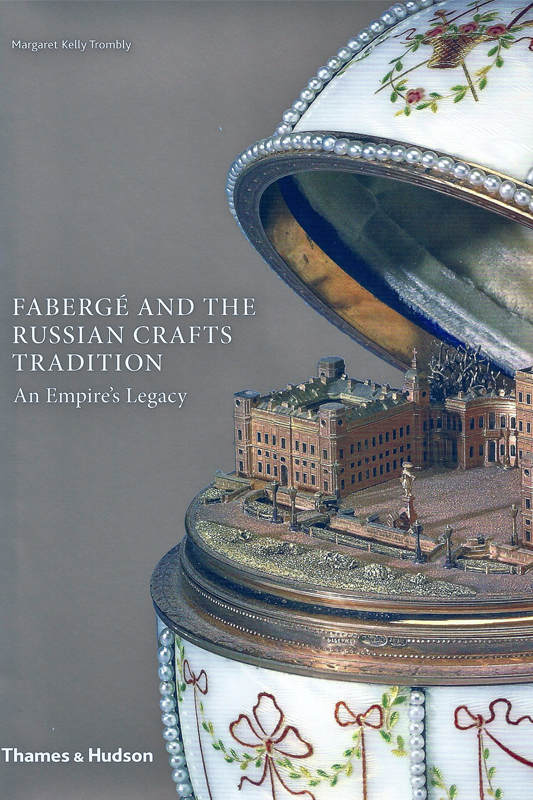 The book accompanying the exhibition 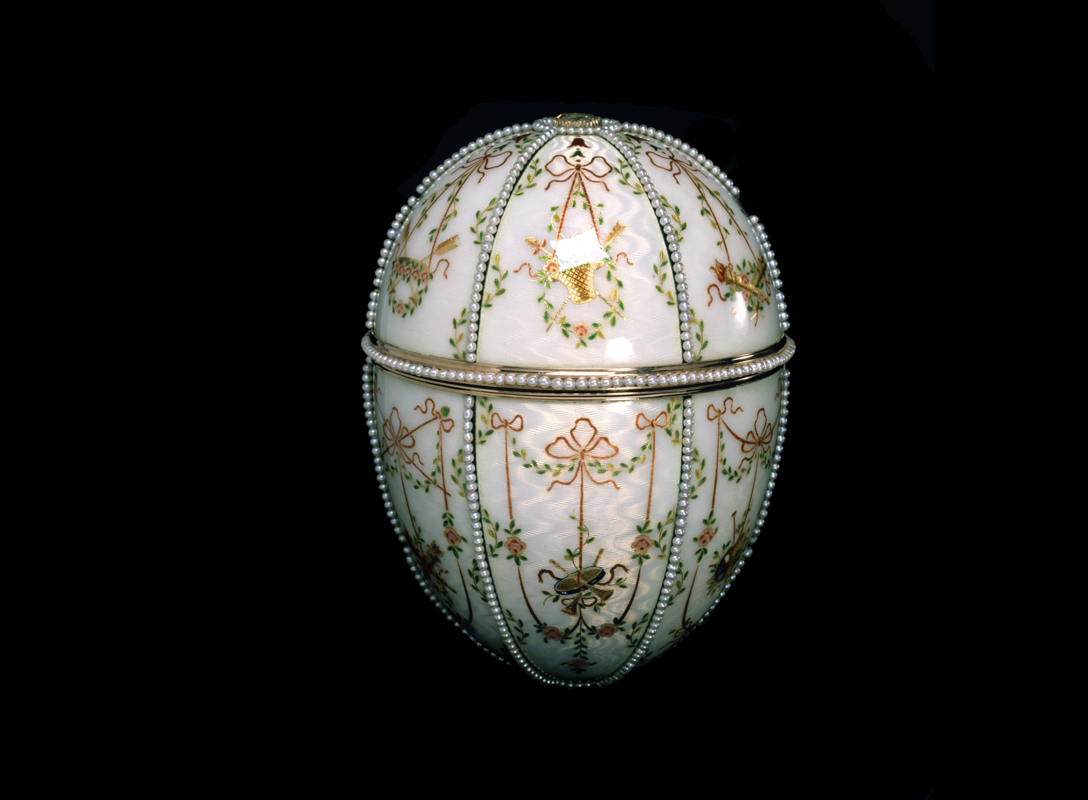 The Gatchia Palace Egg was presented by Emperor Nicholas to his mother the Dowager Empress Maria Fedorovna on Easter Day 1901. It is regarded as one of Fabergé’s best compositions. Made of varicoloured gold, it is embellished with green, red, yellow and white enamels as well as pearls. Image courtesy of the Walters Art Museum

The egg is so named as it opens to reveal a beautifully rendered four-coloured gold model of the Gatchia Palace, the Dowager Empress’s winter home near St Petersburg. This lifts out to reveal a velvet-lined open space that would have contained a precious jewel (now lost). The height of the egg is 12.7cm (5in). The workmaster was Mikhail Perkhin. Image courtesy of the Walters Art Museum 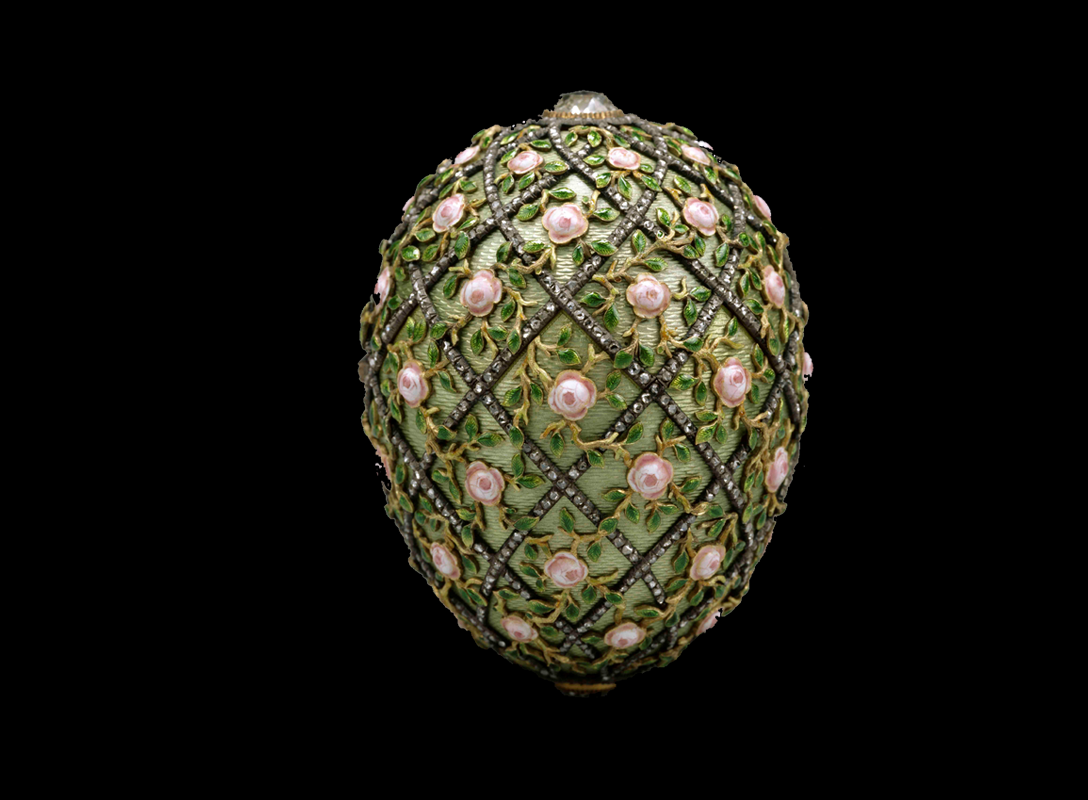 The Rose Trellis Egg was given by Emperor Nicholas II to his wife, the Empress Alexandra Fedorovna, on Easter Day 1907. It is made of gold, the shell is enamelled translucent green over a guilloché ground. Pink enamel roses with emerald green leaves are centred within each lattice created by the diamond-set trellis. Its surprise was a diamond necklace featuring a diamond-set miniature of the Tsarevich Alexei, but it is now missing. The egg has a height of 7.7cm (just over 3in). The workmaster was Henrik Wigström. Image courtesy of the Walters Art Museum

Nov
FABERGÉ AND THE RUSSIAN CRAFTS

This book accompanies the exhibition of the same name that is staged at the Walters Art Museum, Baltimore, USA. This is one of several events featuring Fabergé, which are being held to mark the 100th anniversary of the Russian Revolution. It opened on 12th November 2017 and will run through to 27th May 2018.

The Museum is internationally renowned for its collection of art, which was amassed substantially by two men, the father and son railway barons and avid collectors William and Henry Walters. It was eventually bequeathed to the City of Baltimore. Henry Walters was introduced to the work of Peter Carl Fabergé in 1900 when he visited the Exposition Universelle in Paris and saw the display of Fabergé Imperial Easter Eggs, jewellery and objets de luxe which brought the company wide acclaim.

Later that year he sailed in his yacht SS Narada up the River Neva to St Petersburg. There he met his old friend Princess Julia Dent Grant Cantacuzène-Speransky, the eldest granddaughter of President Ulysses S Grant. The princess guided Henry and his fellow passengers to Fabergé’s newly opened HQ on Bolshaya Morskaya Street. He purchased an array of hardstone carved animals and several elegant jewelled parasol handles as intended gifts for his nieces.

After the Revolution he started to buy Russian art and objets d’art. The first piece was the circa 1600 The Hospitality of Abraham Icon he acquired in 1922. From 1928 to 1931 he purchased 80 objects from Alexandre Polovtsoff, who had escaped from the USSR after the Revolution and settled in Paris.

Alexandre’s father had married the foster daughter of Baron Stieglitz, the Governor of the State Bank of the Russian Empire and a philanthropist. The Baron had established a school of industrial art in St Petersburg and funded the adjacent Stieglitz Museum in 1882 for the benefit its students. In 1885-6, Alexandre’s father contributed greatly to the formation of the Museum and met William Walters on a buying trip to Paris.

Alexandre was appointed to the board of the Museum in 1890. He was an officer in the Ministry of Foreign Affairs and travelled widely. This gave him the opportunity to purchase substantial collections of art from the countries that bordered Russia for both the Museum and himself. In 1917 the Soviets named him director of the Stieglitz Museum and later commissar of the Pavlovsk Palace Museum.

While much of Alexandre’s personal collection was absorbed into the Hermitage when the Soviets began their campaign of consolidation, he clearly retained some. He also somehow acquired two Imperial Eggs. These were among the 80 works of art he sold to Henry Walters.

The exhibition and the book give a fascinating overview of Russian decorative art over nine centuries. It reveals a highly accomplished crafts tradition that persisted for nearly 1000 years from a 12th century temple pendant to a the work of Fabergé, including the two Imperial Eggs.

Details of the exhibition at the Walters Art Museum, Baltimore, USA may be viewed at https://thewalters.org/

The book, which is authored by Margaret Kelly Trombly and others, is published by Thames & Hudson. It is available at the Museum for US$35.95, while the UK normal retail price is £29.95. Copies are available on Amazon.

Fabergé products available online and in the international boutiques.