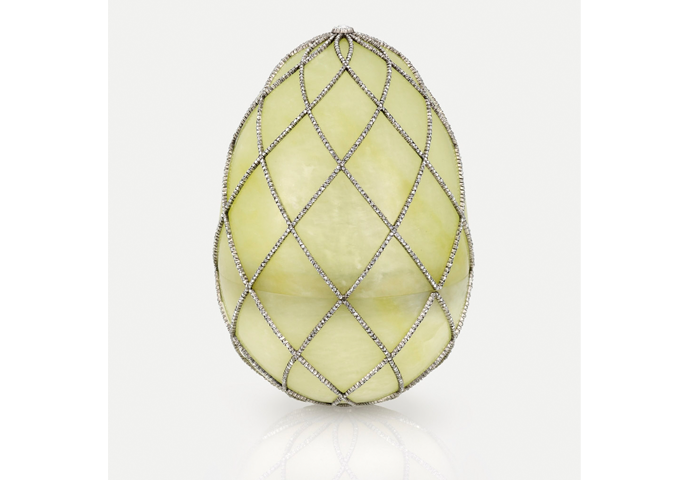 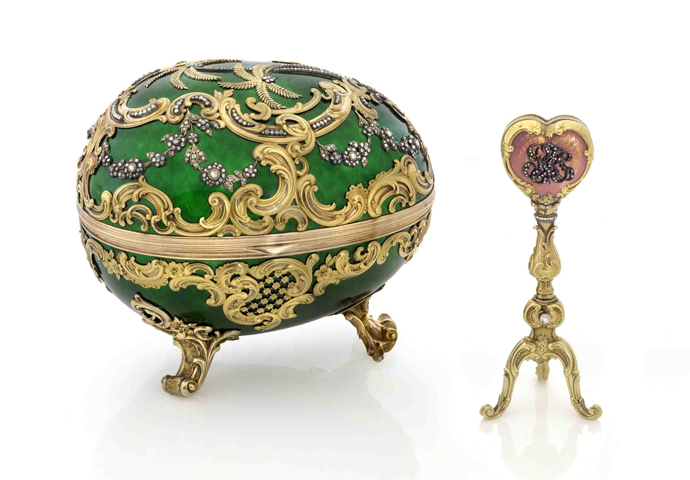 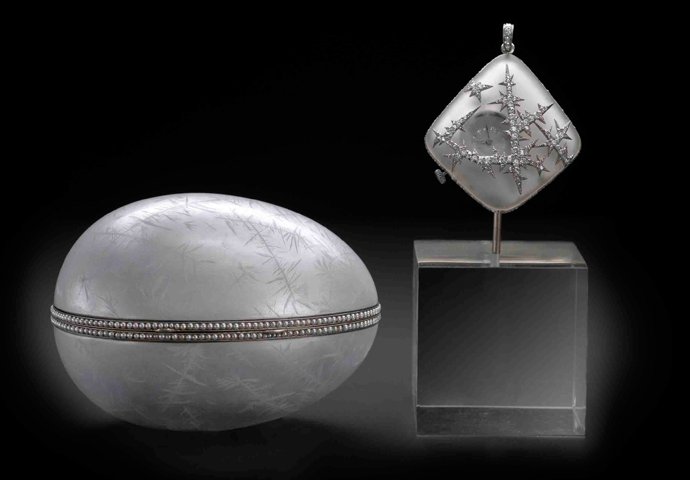 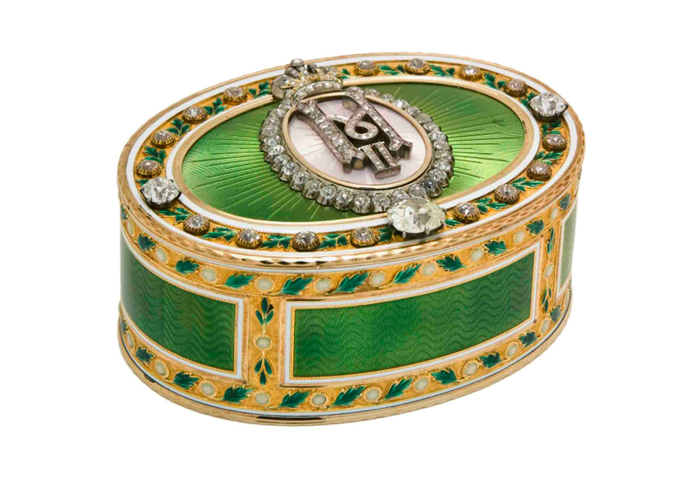 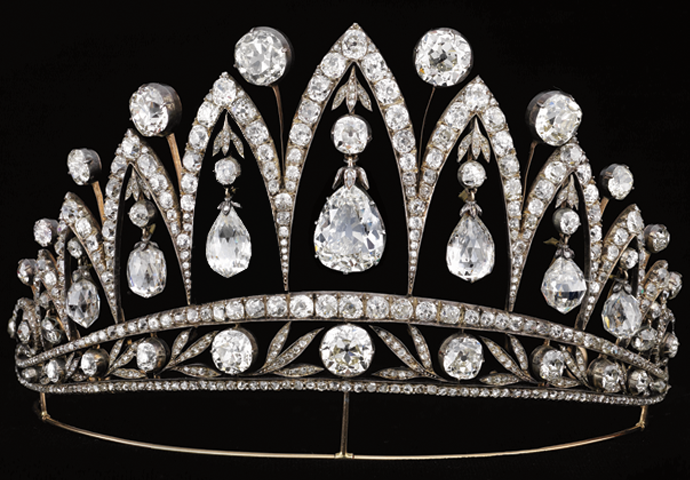 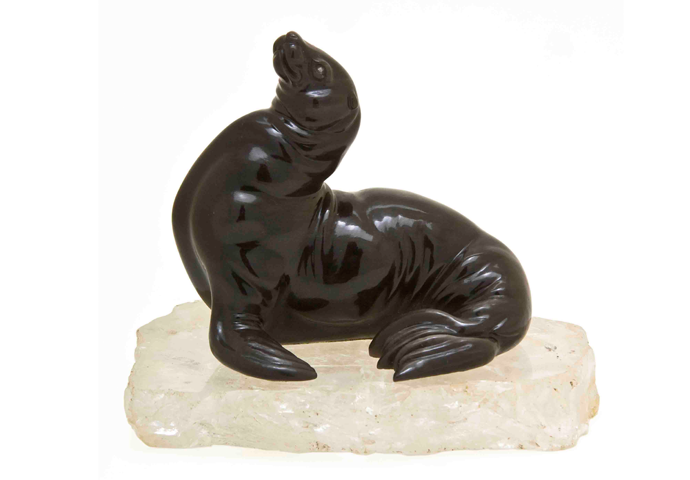 The Houston Museum of Natural Science, Texas, will showcase the exhibition Fabergé: A Brilliant Vision from 1st February 2013 until 31 December 2013. The exhibition includes over 350 Fabergé jewels and decorative objects on loan from the collection of Dorothy and Artie McFerrin of Houston, who have been ardent collectors of the work of Peter Carl Fabergé over the past ten years. Today the collection is one of the world’s foremost privately owned Fabergé collections, and features three of the historic Fabergé Eggs.

A highlight of the exhibition is the Diamond Trellis Egg, commissioned in 1892 by the Emperor Alexander III for presentation to his wife the Empress Maria Feodorovna. Unfortunately its hidden surprise, an automaton in the form of an elephant, was separated from the egg in the early Soviet era. This is one of only three of the original forty-two Imperial Fabergé Eggs to survive and be owned by a private individual.

The most elaborate of McFerrin’s trio is one of a series of seven eggs made from 1898 through to 1904 for Alexander Kelkh, a nobleman, to lavish upon his wife Varvara, an industrial heiress of great wealth. The Rocaille Egg was made in 1902 in the rococo style crafted from translucent green enamel and decorated with gold scrolls, platinum flowers, diamonds and gold palm trees. It contains its original surprise, a gold tripod that fans out to reveal three heart-shaped frames.

The third egg is the exquisite Nobel Ice Egg made for Dr Emmanuel Nobel, a Swedish-Russian oil baron whose younger brother was Alfred Nobel of the Nobel Peace Prize fame. Emmanuel Nobel was a loyal Fabergé client who liked to bestow gifts upon his female acquaintances, which on occasions would be hidden among place settings as a surprise or plucked from his pocket as a spur-of-the-moment informal presentation. In 1912 Nobel placed an order for 40 pieces of jewellery as gifts for the ladies attending one of his lavish dinners. This one was to have a ‘Russian Winter’ theme and it was stipulated that the design of the pieces had to be completely new. Alma Pihl, a relatively new young recruit to the Fabergé design team, was given the task. Inspired by frost on the glass of a windowpane, she designed ‘winter jewels’ in the form of snowflakes or frost. The flakes were made using rose-cut diamonds set in platinum, while the frost was captured in the imaginative use of rock crystal embellished with rose-cut diamonds set in platinum. Nobel was delighted with the pieces and subsequently ordered a winter-themed egg. Its silver body has been engraved to represent frost and then enamelled in translucent ice blue. The egg’s surprise is a pendant watch set in rock crystal embellished with platinum set with diamonds to give it a ‘frosty look’.

Along with the famous eggs, other spectacular pieces on show include a stunning gold and enamel snuff box bearing the cipher of Emperor Nicholas II and important presentation pieces from the Emperors, including one bearing the miniature portrait of Alexander III that was presented to Otto von Bismarck, the first Chancellor of a unified Germany. A white diamond tiara is of great importance as its briolette-cut diamonds were given by the Russian Emperor Alexander I to Empress Josephine of France. They landed back in the Romanov family through marriage and were incorporated into the tiara by Fabergé for the eldest daughter of Emperor Nicholas I. Other decorative objects include lavish cigarette cases and carved hardstone animals comprising a spectacular sea lion carved from obsidian which has been polished so expertly that the miniature creature looks as if it has just hopped out of the ocean on to some floating piece of ice, and that its skin is consequently still wet.

The McFerrin Collection is, in the words of Tatiana Fabergé, ‘one of those rare gems’. A book about the collection - From a Snowflake to an Iceberg by Dorothy McFerrin - will be published later this year.

For ticket prices or more information on the Exhibition and symposium visit www.hmns.org

All images courtesy of the Houston Museum of Natural Science.