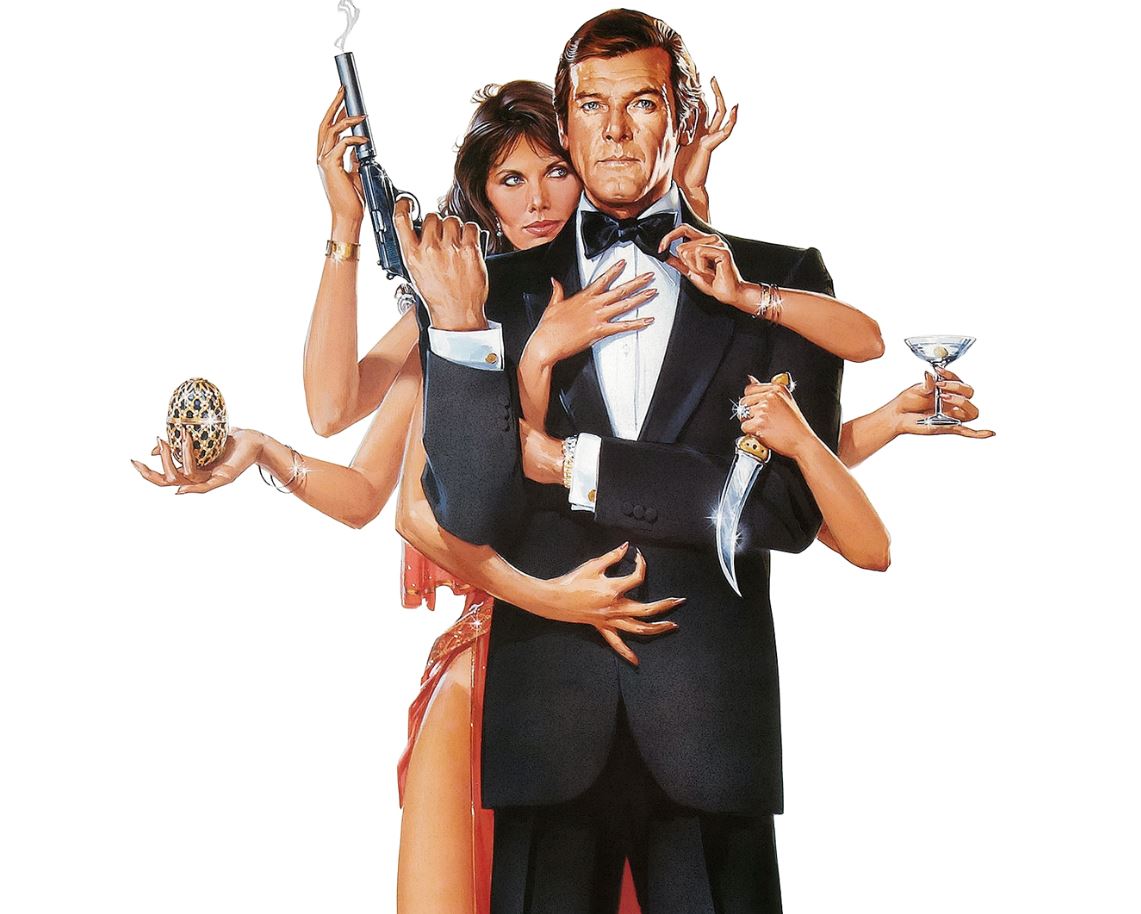 The actor Sir Roger Moore sadly died on 23rd May 2017 aged 89. He became an international celebrity in the 1960s as Simon Templar in the television series The Saint. In 1972 when Sean Connery no longer wanted to play James Bond, he was asked to become the secret agent with a licence to kill. His debut as Bond was in Live and Let Die (1973) and continued for a six further Bond movies until 1985.

His association with Fabergé, then a fragrance and cosmetics company, started in 1970 during an evening reception at Buckingham Palace. The media proprietor and impresario Lew Grade said he wanted to introduce him to George Barrie who owned Fabergé. When the Hollywood drama film Valley of the Dolls (1967) was being filmed, Barrie was asked by the film-makers if he would provide a commercial for a fictitious perfume. Barrie obliged and later realised the power of film and product placement when people started asking for this advertised, but non-existent, product.

The mogul of the cosmetics world therefore decided to start making films. As their best-selling product at the time was Brut aftershave, he called the division Brut Productions. He was looking for someone to run it and Grade recommended Moore. In 1970 Roger Moore became a member of the Fabergé Inc board.

One of the first scripts to pass across his desk at Brut Films was A Touch of Class by Melvin Frank. The writer had chosen Glenda Jackson for the female lead and suggested George Segal to co-star. Moore recommended the script to Barrie who also agreed. Segal was cast and the resulting film received great reviews when released in 1973 and was financially successful. Glenda Jackson’s performance ultimately won her the Best Actress Oscar.

Moore’s second Bond film The Man with the Golden Gun (1974), saw the actor settling into playing the role for laughs, which eventually resulted in him being called ‘the amusing Bond’. In this production, a co-star was a product placement: a Brut aerosol deodorant which was used by 007 in a fight scene to spray two villains in the face.

During the 1970s Barrie and Moore flew around the world promoting Brut in Barrie’s private jet, which had its own keyboard, bar and Presidential bedroom. The two were big jazz fans and between venues they would have jam sessions. Barrie once remarked, ‘Say, Roger your keyboard skills are absolutely Fabergé.’

Octopussy, the 13th James Bond movie and the sixth starring Roger Moore, was released in 1983. Although its title is taken from a short story published by Fleming in 1966, hardly any of the story’s plot is used. Instead the story line centres around a fake and a genuine Fabergé egg. The scene involving the sale of the original egg is taken from The Property of a Lady, a short story by Ian Fleming published by Sotheby’s in 1963. This movie did more than anything else to generate global interest in the series of Fabergé Imperial Eggs, which are now regarded as the last series of great commissions of objets d’art and pinnacles of the goldsmiths’ art.

After his work on the silver screen, Moore worked enthusiastically as a Goodwill Ambassador for the children’s charity UNICEF.

Sir Roger Moore: May you rest in Peace.